The first in a series of “Who Are Those Guys?” meaning, “those guys (or gals)” over there on the right, listed in my blog roll. With all the noise of the internet slapping against us every day, it’s these are the photographers (or others) that I follow most closely. They give me education, insight and inspiration.

On that note, let me introduce you to…..

How to put it nicely? Hmmm…Well, Jeff is the one that dragged me kicking and screaming in this swirling cacaphony of clicks and pixels known as the photoblogosphere.

Ok, I’ll start from the beginning. I met Jeff virtually over at Joe McNally’s blog. Must have been summer of last year, I think, when Joe posted one of his noir images of me at we had shot in the Big Apple. In the comments section, Jeff mentioned something about people under 40 not knowing about Grace Kelly and I had to promptly send Jeff an email. Though I’m under 40 (just barely, mind you), I certainly know of the most beautiful of all of Hitchcock’s ice queens. When I first saw Rear Window in a Film As Art class at La Salle University, I let out an audible “Wow!” in the screening room. A friendship with Jeff was born….

I then started to check out Jeff’s blog and work on a consistent (i.e. daily) basis. I was more than impressed. Behind the lens, he’s as precise as I am flippant. I marvel at how much I learn reading his posts. According to his Flickr bio, he’s been shooting film since the 1970’s and I don’t think he’s forgotten anything he’s ever learned. He knows his photography, his gear and his settings. Where as most of my images are on some level happy accidents (Holy Cow! It actually worked!) his seems to be done effortlessly, but splendidly. Be it urban landscape, natural landscape or air shows, Jeff puts some truly magical pixels in place.

While all of his images are fantastic (especially his bird and nature photography – Moose Peterson should watch his back) his air shows images really stand out to me. I can’t decide if I like his color ones the best, or his B&W conversions. Too close to call for me.

So, as I was puttering around the yard of Saturday, cutting the lawn, replanting some shrugs, I was thinking about doing the “who’s on my blogroll” post. Like I said, I’ve been thinking about it for a while, but couldn’t decide who should kick off this semi-annual post. The late afternoon sun was still warm. I went in and washed the dirt off my hands. The Mrs. and Little One were out, and the Phillies were on TV. Jamie Moyer was dealing for the Phils, trying to keep the Mets at bay while us Philly fans hoped we’d get into their bullpen again, K-Rod or no K-Rod. I turned it up loud enough so that I could hear it out back on my patio….who to do first, who to do first….I pulled a brew out of the fridge and kicked up my feet…who to do first, who to do first…..I looked over at what I had put on the patio table and the answer was pretty clear…. 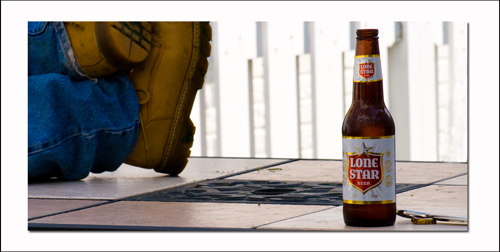