If you haven’t done so yet, head over to Joe McNally’s blog today and check it out. Hoo boy…I knew Syracuse had a good journalism school…I just didn’t realize they turned out such great creative writers. Joe’s description of he and Drew’s workflow is a thing of genius. It’s creative, funny, and well crafted.

Something struck me, though, as he wrote There’s a bank of pay telephones at Grand Central, just by track 17… Some little itch started in my brain and I had to go through some electronic files to scratch it. And lo and behold…. 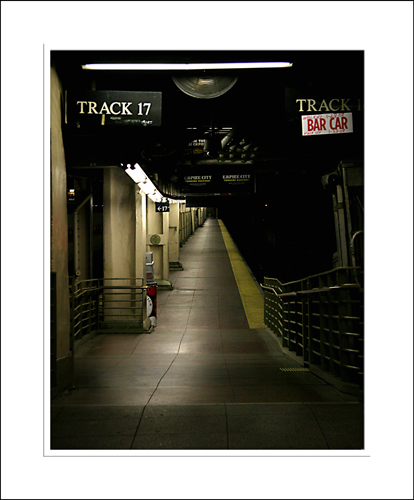 Now, I know Joe probably picked out some random track number (though this may be the Conniticut line and if so, he might have traveled it) but I thought it was funny that he picked something that I shot well over a year ago.

Back in the early part of 2008, I was contacted by a director, Chelsea Landon, who was doing a stage play called Two Detectives. She had heard about my noir images and asked if I could contribute photography to the play. My images would kick off scenes and be shown throughout. Cool stuff.

So for the better part of a month of weekends in late January and February, I bounced all around four of the five boros – Queens and Ozone Park, the Bronx and Riker’s Island, midtown Manhattan, Brooklyn and Brighton Beach – shooting a bunch of location shots to set the stage for various scenes in the play. Best of all, since I sat in in script readings, I had a flavor for the characters and scenes, so I could shoot what I want.

“Rhonda”, Olivia Roric’s character, was the femme fatale of the play and Grand Central Terminal (that’s it’s true name, it’s not Grand Central Station) was the location for the climax. I knew I’d be doing a fair amount of shooting both Grand Central and Olivia there, so I took some time to scout it out and see what would work. It was while doing the scouting that I found lonely Track 17, but the ambient lighting was haunting and beautiful. The frame wasn’t part of the play, but it was one of my favorite frames from 2008.

Little did I know that it’s there that the pay phone rings and Joe’s trusty assistant gets his next instructions from the scarred Corsican’s intermediary….