Dispatches: The Postseason In South Philly 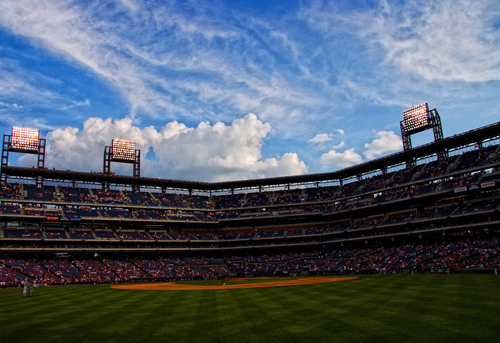 I was ready to take another direction with this post. Until last evening, just before 8 p.m.

It was then, as I was trying to get catch a glimpse of the end of the Cincinnati Reds/Philadelphia Phillies game, that something historic was happening.

But first, I had to try to convince my three year old what we should watch the end of the game rather than our usual 7:30-to-8:00 TV fare, Go Diego Go. Olivia was in a compliant mood so when I said “Wanna watch the Phillies with me?” she said okay.

As I helped her climb up on the bed, I said “We’re going to watch a man do something special now.”

The man was Roy Halladay.

Roy, last evening, threw just the second no-hitter in the Major League Baseball’s postseason since Don Larsen did it (while pitching a perfect game – no baserunners) in 1956. I was lucky to see Roy pitch a few weeks ago when I went to one of the last games of the season.

I’ve been a Phillies fan a long time. They’ve lost more baseball games than any other franchise. It’s been a lot of brutal, losing seasons.

But the last three seasons especially have been super fun. A World Series win – the first since 1980 – in 2008. A fantastic postseason and another World Series appearance last year, and now back in the postseason again. This is the best run a Phillies team has ever had.

I don’t know how it will end up. They may get knocked out in the first round. I just know that last night, with my little girl curled up next to me on the bed, we watched Roy Halladay do something historic and bring a lot of joy to both Phillies fans, and baseball fans. And I’ll never forget Liv, as we watched the Roy on the mound, and the passionate Phillies fans waving their rally towels in the background say:

“When I grow up, I wanna play baseball with Roy”.

Yeah, that would be pretty cool, wouldn’t it.

One thought on “Dispatches: The Postseason In South Philly”