After a looooooooong hiatus, the JSP Sunday Focus is finally back. And I’m really pleased to come back in a big way – a big Texas way.

Joining me on the Jersey side today is Lubbock, Texas,-based magazine/editorial and travel photographer (and teacher!), Jerod Foster.

I first came to find out about Jerod and his work maybe about a year ago, through the likes of Jeff Lynch and Ray Ketchum. When I started to see Jerod’s name appearing in their blogs and Twitter feeds, I thought this is a guy I should check out. And the more I read Jerod’s blog and viewed his work, the more impressed I was with not only his photos, but also his observations about photography and his outlook in general. Pretty refreshing on all accounts. (not to mention his uncanny resemblance to Tom Selleck in Quigley Down Under and/or the ex-Philadelphia Phillies/new Washington Nationals outfielder, Jayson Werth. 🙂 )

Jerod shoots a lot of nature and landscape, but also some some really special people portraits as well. He does a fantastic job at telling story with his camera, whether it’s catching dawn’s early light rising over a lake bed or sparks flying from the edge of a metal grinder.

JSP Q: So, film or digital?
A: Right now, I’m shooting about mostly digital, but I spend about a month total every year shooting film. I’m fortunate to have started out shooting film, and I actually still teach shooting on film to students at Texas Tech University. However, I can’t deny my practical affection for digital, and almost 100% of my assigned shoots are shot digitally. Any images made on film in publication are stock shots.

JSP Q: Canon, Nikon or Other?
A: I’ve been a Canon shooter from day one. I think Nikon has a superb platform, but I haven’t run across anything with Canon that makes me consider switching. I’m not a pixel-peeper, so I don’t have any desire to compare Canon and Nikon along those lines. That being said, I love Canon glass, and Canon’s service has always treated me well. My primary camera for the past few years has been the 5D Mark II. Other than Canon, I periodically spend time on a Hasselblad + Zeiss medium format film system, again, mostly for stock.

JSP Q: Camera eye?
A: Right eye, but I’m working on the left… 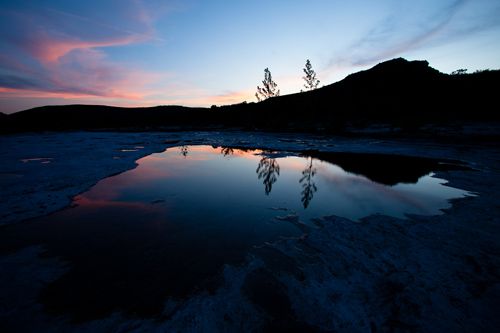 JSP Q: Do you come from a photographic background?
A: I’m not familiar with anyone in my immediate family ever having a direct interest in photography, so no is the simplest answer. However, I did grow up in a family that found much of their downtime (a ranching family doesn’t have a lot of it) immersed in creative activities, such as playing music. My uncle painted when he was younger, and I remember being enthralled by this. I started drawing, eventually shifting my creative activities to playing music, and up until last year, I toured with an alt-country band for nearly six years. (JSP Ed: And that band would be the Hogg Maulies.)

Along the way, I picked up photography as a way to channel what I missed since I quit drawing. I was already writing for several magazines, and my photography work lent itself to the same model. I love color, and I love story, and magazine work was/is a good way to work in this industry.

JSP Q: One of the popular features on your blog is called “Field Lighting.” Explain this feature. What is your theory about the use of off-camera lighting?
A: The Field Lighting series originated as a way for me to continue offering lighting information outside my classroom, and it’s purposed with outlining editorial assignment work from a lighting point of view. There are quite a few blogs and resources out there focused on lighting, especially Strobist-style light work, and to that extent, mine’s not all that different. However, the main goal of this series is to explain using light in a way that compliments story.

I’m a working photographer, and I always appreciate information about lighting technique. If you’re open enough about lighting, what you see implemented in one place under a given context can be translated to your own experiences and environments. With Field Lighting, I want to complement the energy everyone in the industry (amateur or working professional) has for lighting, and integrate story into the mix. This is the reason we’re on assignment in the first place, right?! At one point or another, we’ve all been a slave to the technology and lighting styles of the day. Hopefully this series helps those in search of story use their lights, instead of the other way around.

Sometimes the posts are more technical that others, but since all are either made on assignment, for stock, or for the purpose of this series, each post is centered on story, and why we use light to aid in the telling of that story. Of course, my own shooting style shows through: my desire to use one artificial light in conjunction with natural light, as well as the optimal use of that natural light!

JSP Q: One of my favorite multimedia pieces of yours is called “Thowin’ Hay.” Tell me about that shoot, and putting that piece together.
A: “Throwin’ Hay” was actually just shot on a whim one day a couple summers ago. I grew up on a cattle ranch, besides our own hay crop, the surrounding rural area includes quite a bit of land put solely into hay production. My brother, Seth, owns a hay-hauling business, and picks up and delivers thousands of 60-plus pound bales of hay a season. While my wife and I were back home over a summer weekend, Seth (the fellow with long hair and muscles) headed out to haul a few hundred bales with his friend, Jacob (also with muscles). I tug along with two cameras, three lenses, an audio recorder, and a much-needed bottle of Gatorade. I also served as the driver, which actually allowed me to do what I set out to do in the first place.

I shot quite a bit of HD video, but the stills were more compelling as black and whites and in rapid sequence. I really used the opportunity to test out the new Zoom H4n recorder, and in the process developed a bit of agricultural Americana. The piece started as a vignette of a common agricultural activity, but the notion of a multimedia project emerged as I started using the recorder. I’m glad it did, because on most assignment work, I put together similar work if time permits (I need to get a few of these online)! The sequence was cut using Final Cut Pro, and four hours worth of shooting was complete and in a viable storytelling format!

Q: Talk about your association with the International Guild of Visual Peacemakers. How did that come about?
A: I first heard about IGVP while listening to one of Matt Brandon’s Depth of Field podcast interviews with IGVP president, Mario Mattei. At the time, he and his co-founders were just getting the word out on an online community they planned to create under a mission that supported the use of visual communication to counter cultural stereotyping. Their online presence was in the formative stages, and I contacted Mario about becoming a charter member to help test the site and advance the idea of visual peacemaking to the greater photographic community. Since then, I’ve guest contributed to their blog about documenting culture at home, and I’m helping Mario edit our first collaborative book project, along with curator Jeffrey Chapman, and graphic designer Joshua Smith. The IGVP community continues to grow, and it’s serving to connect like-minded and stylistically diverse photographers all over the globe. Although a new organization, it’s a moving force in cultural photography! I’m proud to have been there since the onset!

JSP Q: What’s next for Jerod Foster?
A: I’m fortunate to get to work at a variety of levels within the photography industry, whether shooting, teaching, or writing, and it’s my goal to continue along this path. I’m always eager for magazine and other editorial assignments, and I certainly enjoy teaching through in-person classes at the university or through blogging. I’m in the process of putting together a couple book projects, and I’d like to see the development of a few workshops within the next couple of years. Truth be told, as long as I’m staying busy, I’m content. Freelancing can have its ups and downs, but there’s always a story to be told through feature or portraiture somewhere!

As you can see, Jerod has a lot going on. If you get the chance, check out his website and his blog, his multimedia projects on Vimeo and his musing on Twitter.