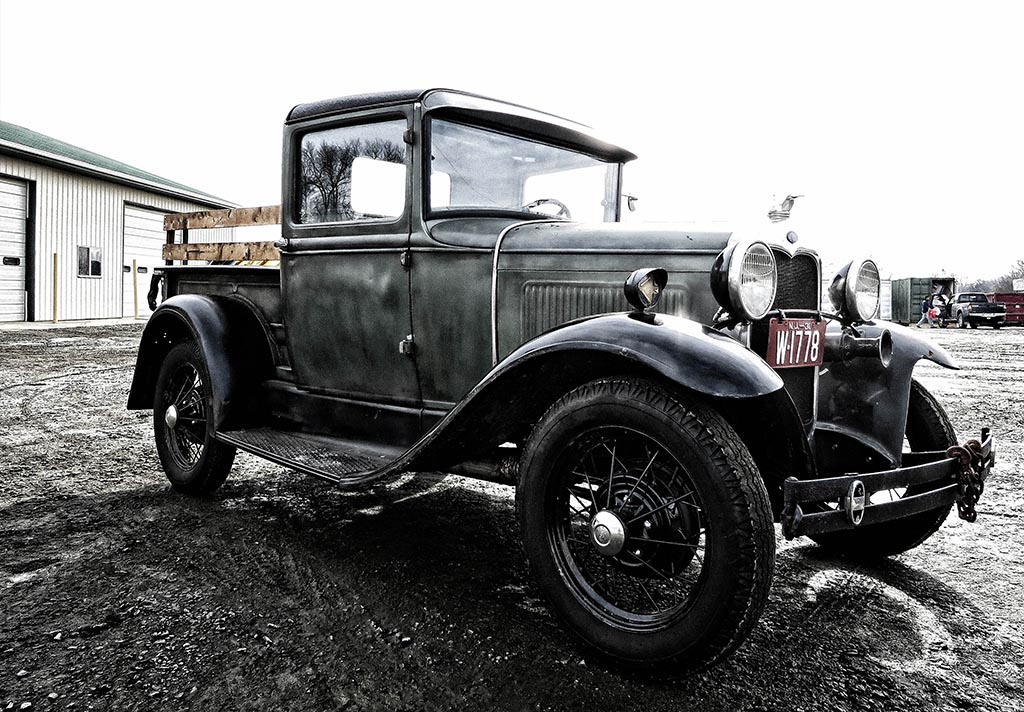 Last Saturday, running some errands. Me and the boys headed over to the spot where we drop off our recycling.

While there, I noticed this oh-so-cool old truck. A 1931 Ford. I had seen it before. Struck me a little strange that someone brings their classic pick-up to drop off recycling, but then again, that’s what pick-ups do. They work. This one looked like one Dillinger ran from the law in.

Anyway, I found it really intriguing from a photographic standpoint and wanted to get some shots of it. I noticed the gent who was getting stuff out of it. Hmmm….

He’ll either say yes to my request, or drop me with a shot to the jaw.

I went up to him with one of my JSP business cards in hand, the one that has a shot of a 1940s Buick 8 on the back of it. That was the ice breaker when I introduced myself to him. Turns out he was the nicest guy.

I told him about my Hell On Wheels project and said I’d love to shoot his truck.

He said “Oh ok, how about if I just pull it over there so that you have more room to photograph it.”

Perfect. We finished what we came there to do, and while my boys waited in the back of my truck, I quickly got to work with my Canon S110. Just a couple of shots, a couple of angles.

I was asking him questions the whole time. He told me how, since he was 18, he always wanted this type of truck. He normally rebuilds old Harleys, but had the opportunity to work on this. He talked with pride how he hand spray-painted this with the shades of green and black and left it outside to rust a little. He loved how it came out. Said he takes it to car shows now and again, but he just likes it.

“He” is Matt. In the course of my conversation with him, I asked to also shoot him with the truck. In doing so, he became Number 96 on my 100 Strangers project.

A few minutes later, I thanked him and we shook hands. He invited me to stop by his shop some day and I can see other builds he’s doing.

Hopefully, I’ll get the chance.