All A-Buzz About Bees 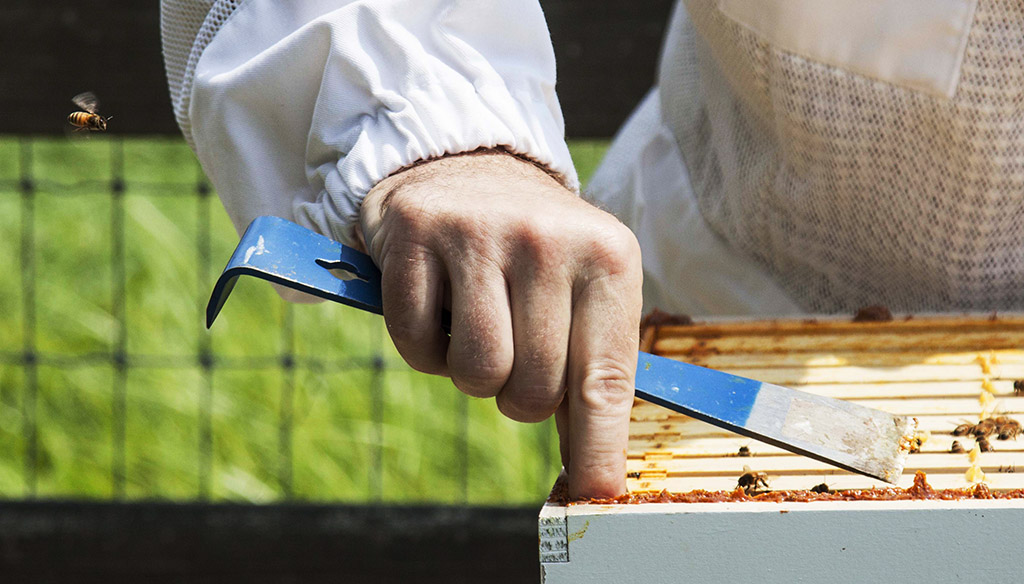 When you think about bees, is it with warm and cuddly slant or with great apprehension?

I’m thinking it’s probably a bit less on warm and cuddly side and more on the AARRRGGHH, Run Away!! side.

Recently I had a chance to get up close and personal with these little creatures. And I was amazed at what I found out about beekeeping, and the whole process in general.

This all came about for me because I saw a small item in one of my company’s newsletters that mentioned how a few of our campuses are now keeping some hives of honey bees. This came on the heels of recently reading quite a few news articles and op-ed pieces, like this one in the NY Times, about how the global honeybee population are in demise. Colony Collapse Disorder (CCD) is a mysterious dying off of bee colonies for no apparent reason that has struck the beekeeping industry over the past few years, and it does not bode well for the environment. 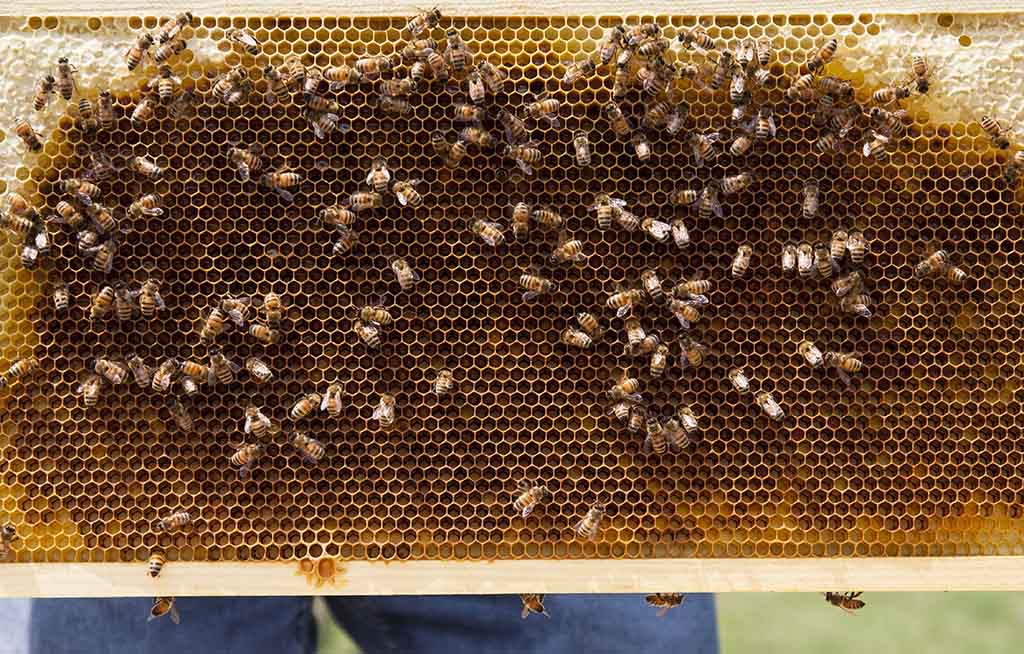 The role that this bit of nature plays in our everyday lives interests me. I have to admit, I don’t really think about honey bees too much. When I’m outside with the kids, they always run from bees. But I want to teach them that not all bees are bad, and they are a good and necessary part of nature.

So to get the chance to get to speak with someone about apiculture was something I wanted to do. I thought it could make a good photo essay as well. From that little newsletter piece, I reached to to some of my colleagues that were keeping these bees. 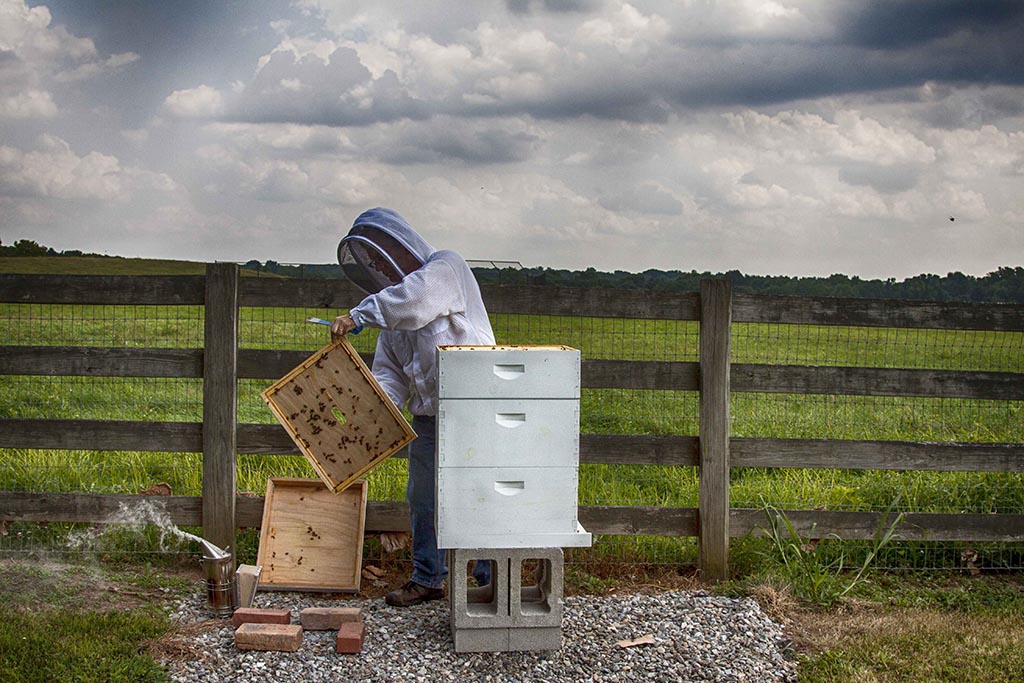 I met with Michael and a couple of other guys a few weeks ago for coffee, and expressed my interest in doing this story. They were more than happy to talk to me about the basics of beekeeping, how the company got involved, etc. Michael then invited me to check the hives out with him at some point. He’s relatively new to beekeeping, just a couple of years in after taking a two-day class that his wife got him for his birthday.

But it’s not just a hobby for him. Honeybees have practical applications, and even so in the healthcare industry. When he pitched setting up hives on company grounds, they were up for it (granted, one of the campus’ we have them on is a bit on the rural side. It’s ringed with wildflowers, has cattle and sheep on it, and also has what was, at one time, the largest solar panel array in New Jersey.) It’s very environmentally conscious.

After a couple of weeks of trying to coordinate our schedules, I finally was able to go out with Michael when he checked on the hives. 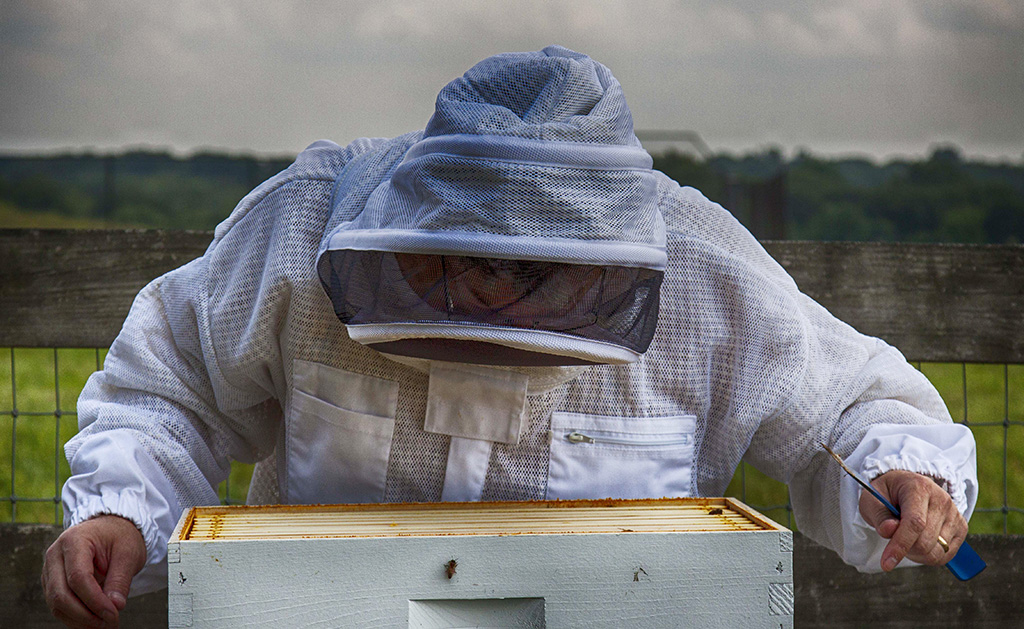 While he worked, he explained the basics of beekeeping to me – a little bit about bee biology, hive management, about the queens and the sentries and the drones. It’s a really interesting area.

Of course, it’s not without it’s drawbacks. That would be the stings. As you can see, Michael often wore protective clothing. The first line of defense against bee stings is move slowly so as not to jostle the vertical hives too much. A smoker is a second line of defense as the smoke dulls the buzz and make the bees a bit drowsy. 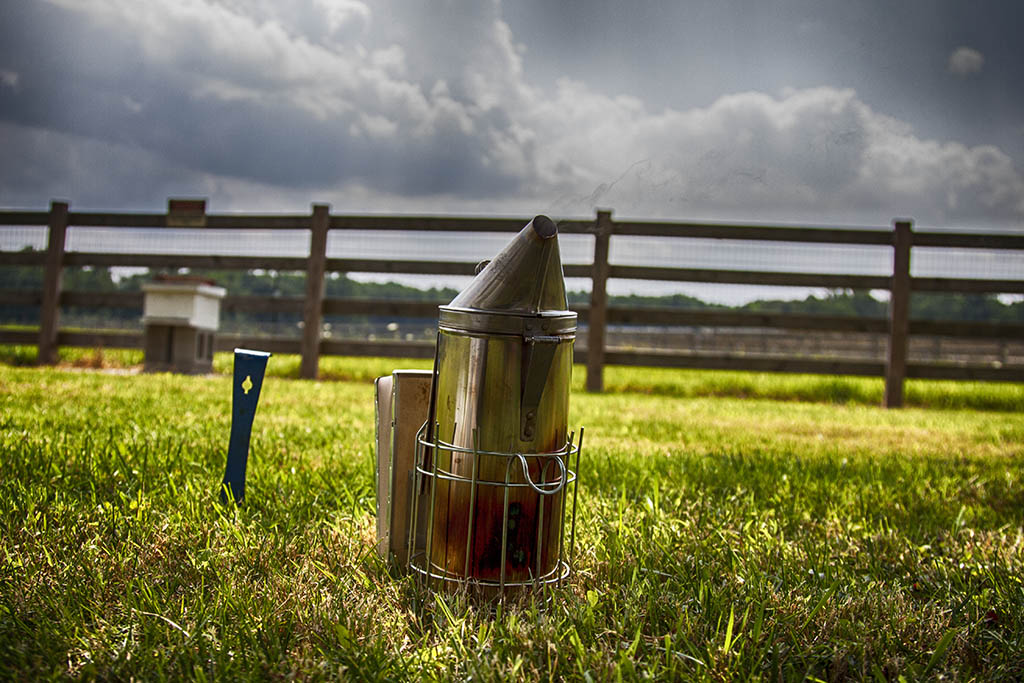 Still, the sting is always part and parcel of the activity. Unfortunately, Michael caught two while I was there. I jokingly said I may be his bad luck item. 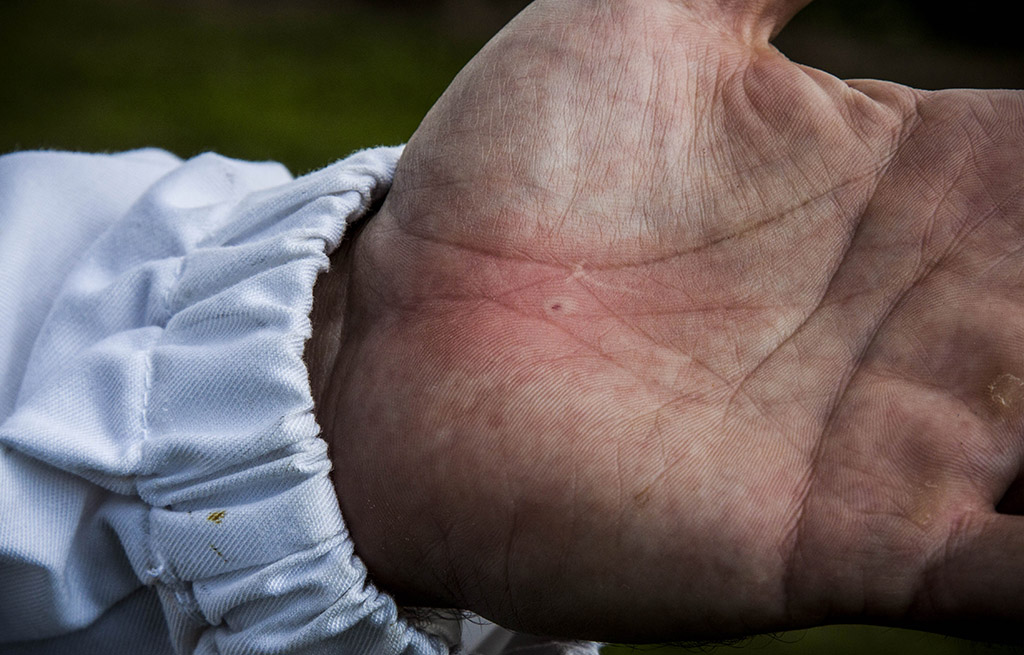 While we were there, Tim Schuler, the NJ State Apiarist with the New Jersey Department of Agriculture, came by to check on Micheal’s hives. Tim has more than 22 years of beekeeping experience and you could just see the command and deftness with which handles doing his work. He smoked the hives a bit, then proceeded to check them out. Almost immediately, he pointed out a virgin queen bee to Michael. He checked the other hives as well, all sans protective gear, and didn’t get stung. 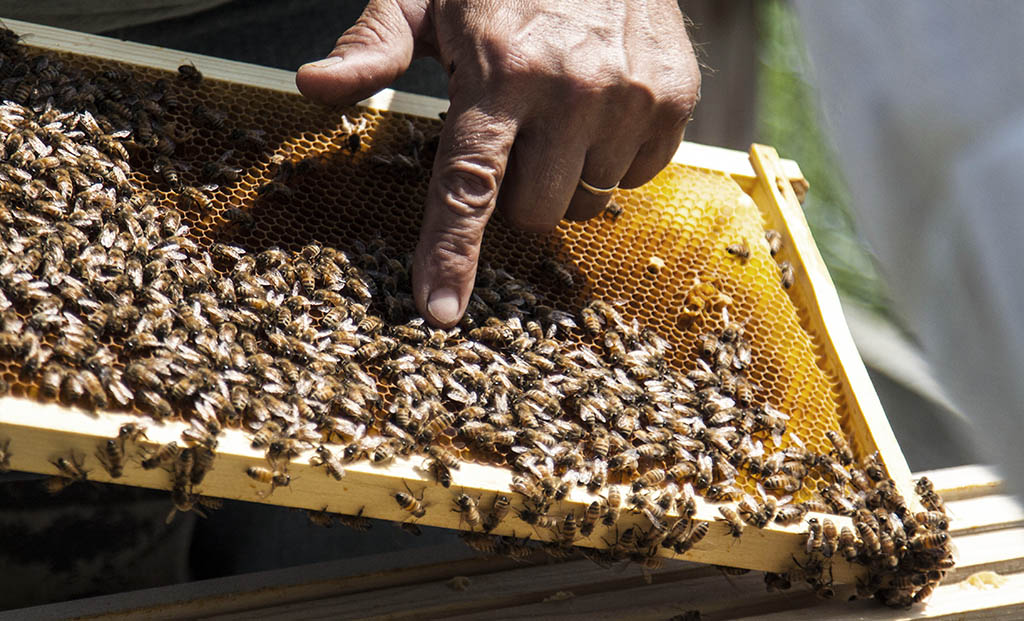 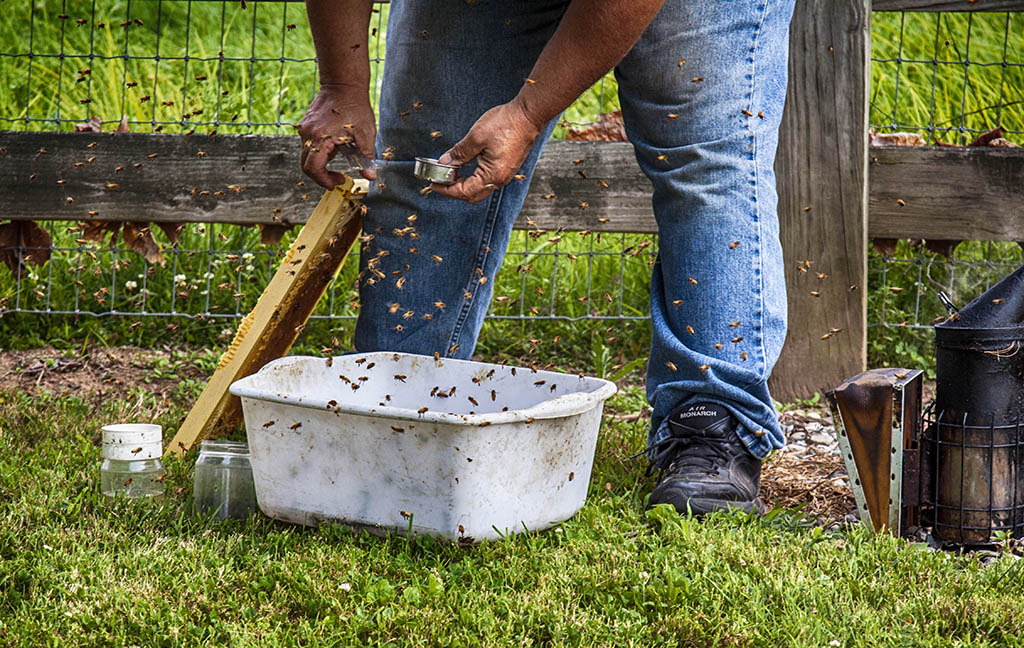 There’s a whole host of diseases a hive can get, with mites being a big one. The last thing Tim did was check the hives for mites, using a special solution. 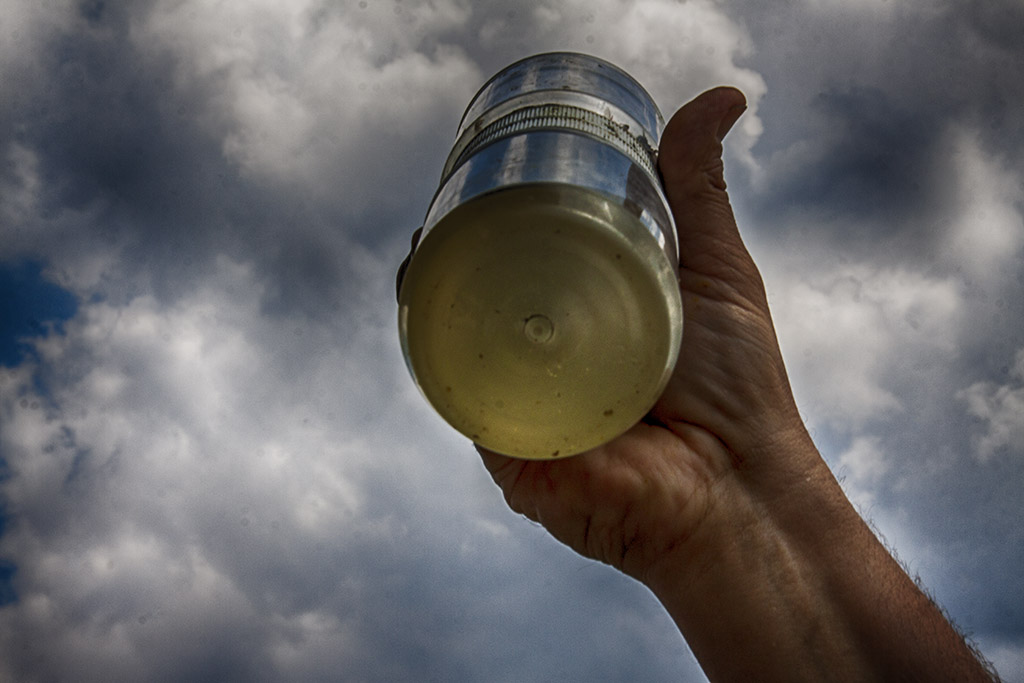 Luckily, everything checked out and the hives were in good shape. Many of the frames in Michael’s hives were capped, which can then be scraped and opened to get to the honey.

It was quite an interesting education. I’m not sure I’m ready to start tending my own hives yet, but I’d consider it. And, aside from a few minutes where a sentry bee buzzed around me to move me away from the hive when the bees were agitated, I had no problems, didn’t get stung.

So the next time you see local honey available, pick some up and know that the more we can increase the bee population, the better off we – and the environment- will bee. 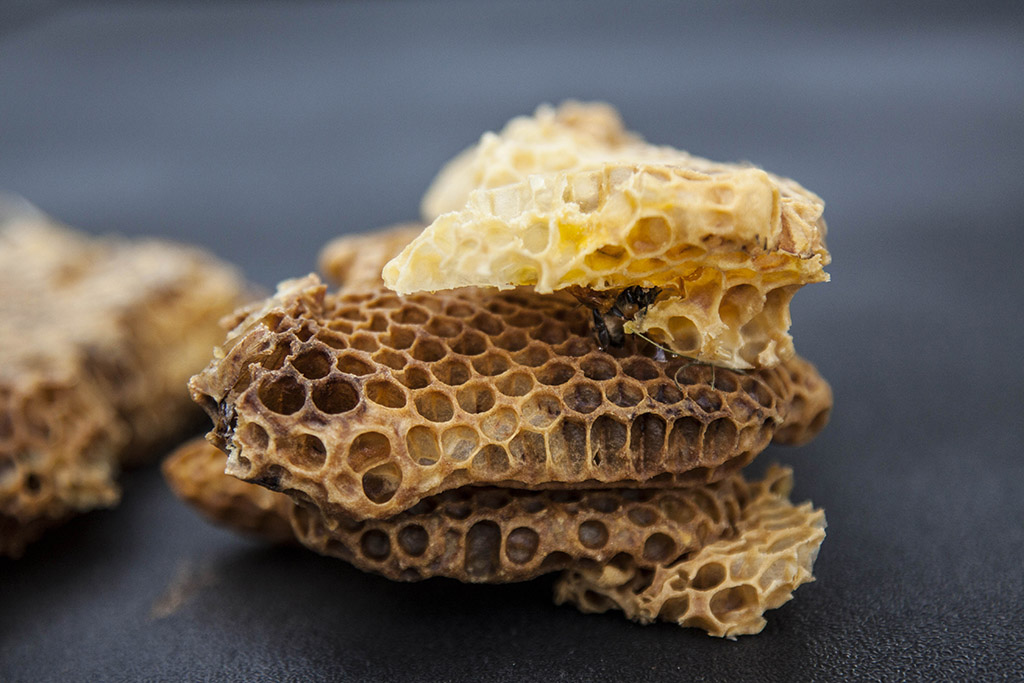 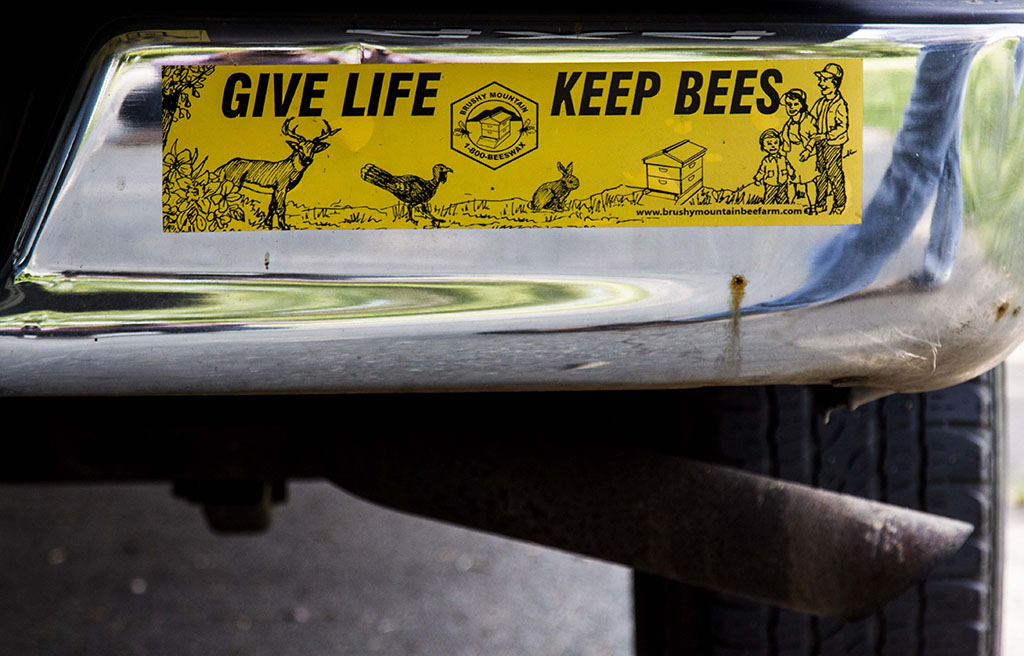 (See what I did there? I said will bee… not will be. Clever, right?)

5 thoughts on “All A-Buzz About Bees”