Corporate Work: An Artist In Queens

Just recently, my company, on their website, published a really interesting story about an artist in Queens, New York, and her art and her clothing line that she designs.

And her struggle. With schizophrenia.

And while it may be her struggle, it’s also her rocket fuel. I’m not going to retell her story here, just click the link above, read the piece and watch the video. Please do all of that, I’m really proud of it.

This was a really interesting profile to work on. We started talking with a Michelle a few months ago, but things/schedules kept getting in the way.

Finally, in mid-September, we hit our stride with planning and from there it happened fairly quickly.

In mid-October, I met Kevin Nelson, my videographer, at Fountain House Gallery in the Hell’s Kitchen section of Manhattan. There, Michelle was going to set up a pop-up store for her clothing line.

The goal was to film her there doing what she does, and hopefully do an on-camera interview with her. And for me to do portraits and BTS, of course.

These portraits were taken within about 90 minutes of first meeting Michelle. I got lucky – she has a big personality and is comfortable in front of the camera. I had done a quick scout of the area and liked this white wall. I like the pose she gave me here, with just a bit of art direction to look a certain way so that I could get that sun kiss off the corner of her sunglasses.

And she has the fun in her that when, on the two block walk back to the gallery, I asked her to get behind the heavy plastic shades that led into the backroom of a grocery store, she had no problem with that.

The rest of that first day was spent filming and shooting more stills. Michelle’s goal is to start the conversation to raise awareness about mental health, and she’s very adept at doing that.

We filmed for the better part of that day, leaving her around 3 p.m. But we made plans to meet up again next week, at her apartment in Queens so that we could do the formal interview (ended up being to loud on a Hell’s Kitchen street corner, even with good mics. Imagine that.) as well as shoot some other establishing sequences.

So, a few days before Halloween, I met Kevin at a train station in North Jersey and we journeyed into Queens together. He had been to Michelle’s apartment on that first day as he met her there to film her getting to gallery. But you knew that since you clicked the link above and watched the video, right?)

It was a beautiful late October day, a bit warmer than the first, but we both commented on how the trees overlooking the Brooklyn-Queens Expressway STILL hadn’t turned colors. So odd.

Anyway, as we’re driving around looking for a spot to park the car, Kevin tell me that Michelle lives on Sesame Street, or pretty close to it, anyway.

What are you talking about, I asked?

Well, he says, right around the corner is Kaufman Astoria Studios, and that’s where it’s been filmed all these years. 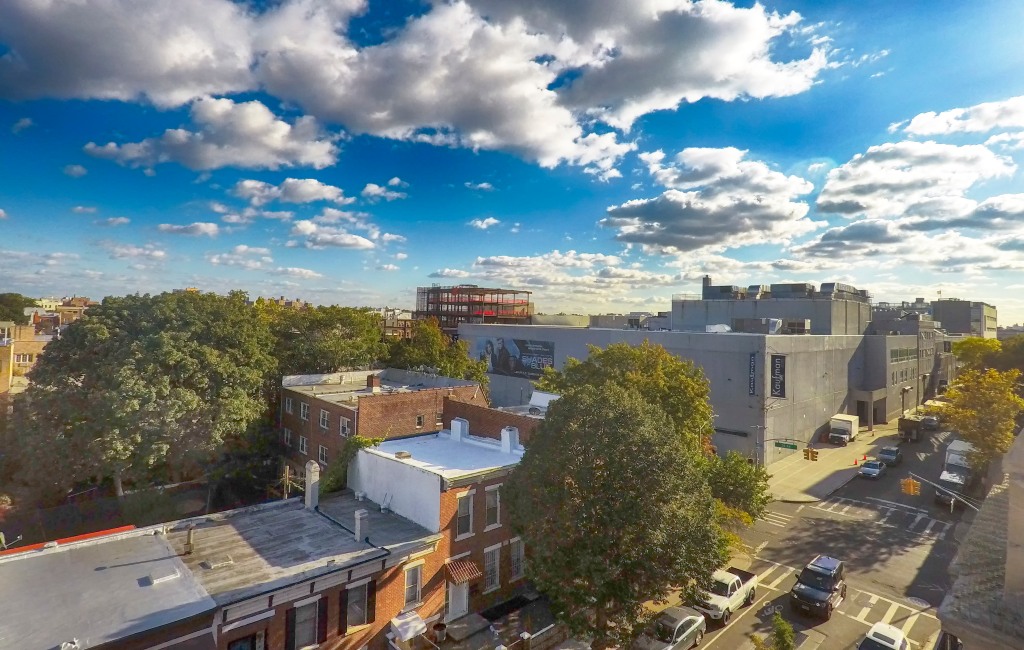 That big building with the Shades of Blue banner hanging, another show filmed at KAS, above. Shot with my GoPro from the roof of Michelle’s building.

This shoot day consisted of the formal Q&A interview (I did the Q’s, Kevin filmed, and Michelle provided the A’s), some general establishing shots of Michelle working on her computer and drawing, and some of the wrap-up footage on the roof.

I split my time between shooting portraits… 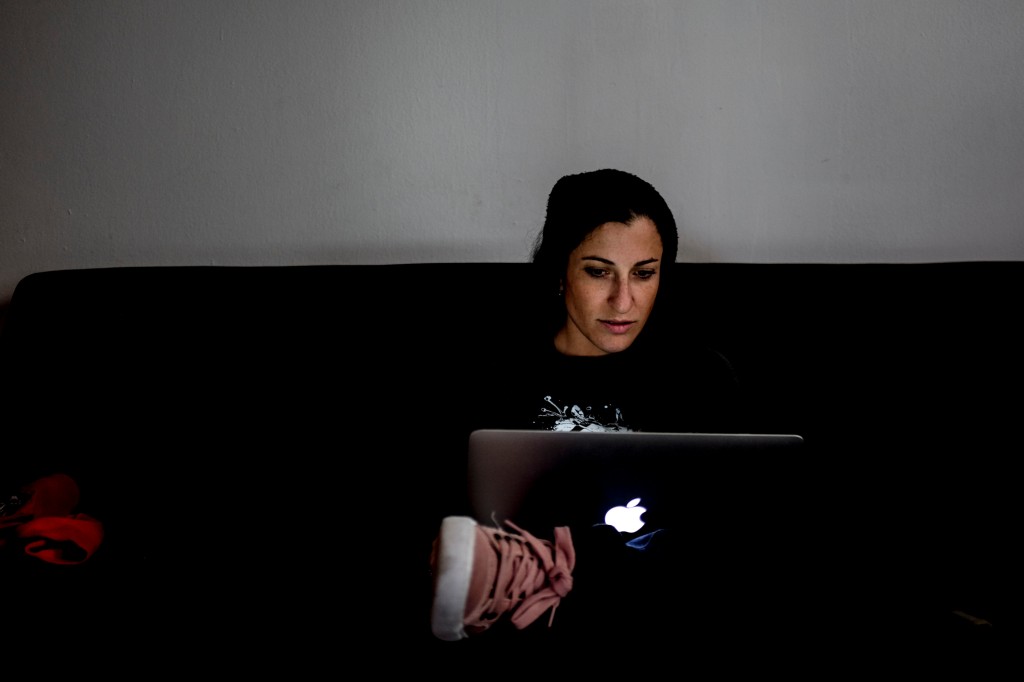 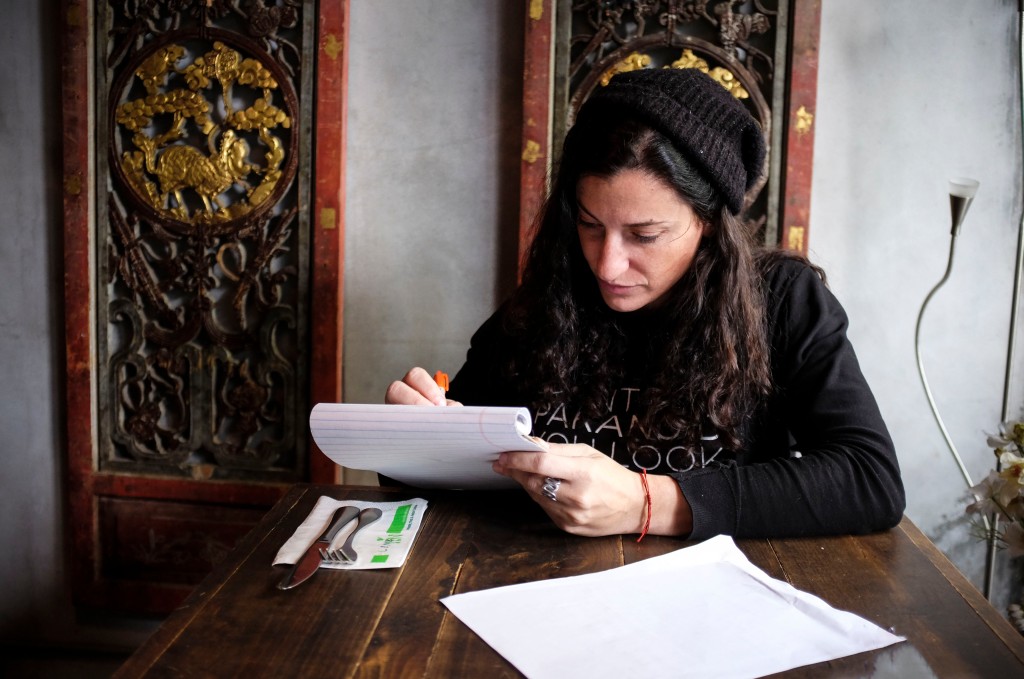 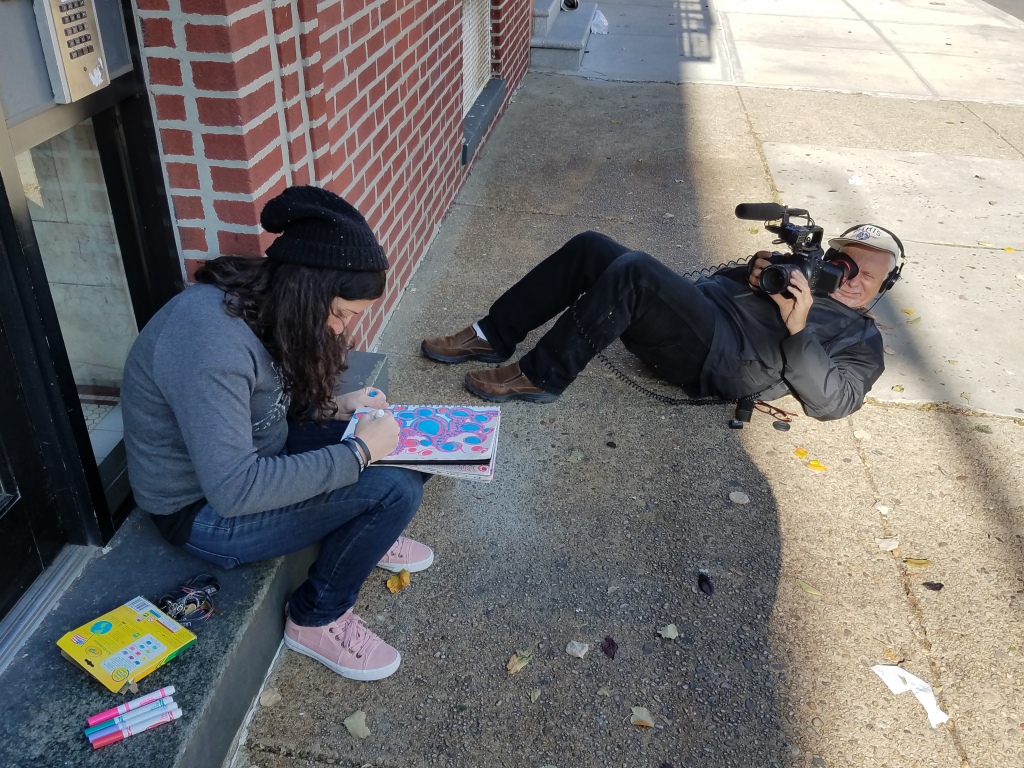 As you can see, Kevin is a hard worker. I love working with him. He’s got great experience, great vision and an open mind. We play off each other very well, and I think we produce some neat stories together.

And, it appears we did a pretty nice story about Michelle. The company is happy with the story, and best/most of all, Michelle really likes it to. If you’re on social media, please give her a follow – all her links are at the bottom of the story linked above (yes, I’m trying to drive traffic there. That’s part of my day job too.)

Anyway, we came down off that roof in Queens with the guts to the story in our hands (and media cards). One last snap before we were back off to the wilds of Jersey.

Just as there is no stigma to a physical illness like cancer, there shouldn’t be a stigma to mental illness either. Michelle is trying to get that point across. And, as a remembrance, I’m proud to wear one of Michelle’s custom shirts now too! 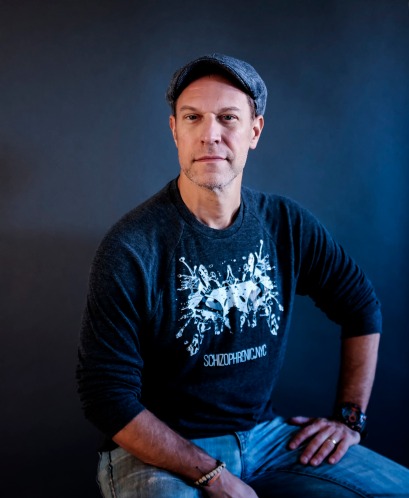 2 thoughts on “Corporate Work: An Artist In Queens”