Event: On The Red Carpet in Asbury Park

Sometimes I still wonder how I find myself in certain places with a camera (or two) slung around my neck and/or off my shoulder.

Shooting a fashion show earlier this year is a good example. Last Wednesday afternoon was another one of those times. It was then, under darkening skies and in muggy air, I found myself making my way to Convention Hall in Asbury Park to a red carpet event for the premier of Blinded By The Light.

I mean, if you’re going to do a movie about how Bruce Springsteen influenced you, it’s only right that you have the U.S. premier in Asbury Park, right?

And it’s pretty cool when Bruce himself shows up. More on that in a bit.

But there I was, just after 5 pm, getting credentialed in and taking my place along photographer row. (The sticky press pass was a pain all night – the humidity made it curl and it wouldn’t stay on my shirt. I eventually put it on the back of a business card to give it some support.) 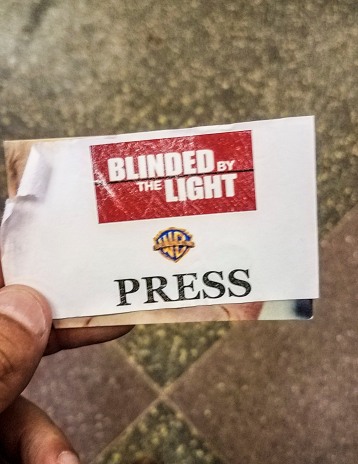 I got in at a good time though – about 15 minutes after I got my spot, the press junket arrived from where the cast was staying in New York, and they quickly filled in the areas behind me. I shifted over slightly to accommodate one, but hey….I’ve learned, in these instances, that you have stake your spot and don’t budge. It’s not impolite. It’s business. It’s your spot. We all have a job to do, I ain’t moving to help you do yours.

Speaking of the jobs part, last week when I was vacation in Wyoming, I got a couple of emails to shoot this. Of course, I was partial to my friends over at Backstreets.com and that was the right move, so it was for them that I was shooting for again.

This event was an interesting learning experience for me. I had my usual kit ready to go: Canon 70D with my 24-105 and my FujiX100T. I had a Canon Speedlight with me – even ran into a Walgreens in Neptune to buy some fresh AA batteries in case I needed them – but didn’t expect to use it.

As I set up on the red carpet, I felt I was in good shape – plenty of window light from the huge windows over the doorway of Convention Hall, plus, some video teams had set up a couple of LED panels on the red carpet for when they did those video shoots. This spilled light over to where I needed it.

You can see the big windows here – that’s Dan Amato spying me and me snapping him with the windows in the background.

Anyway, many of the other photographers in the pit had their flashes on, and were popping away. All well and good.

But you know what that did to me? It caused problems that I only realized a bit later.

Yes, this shot is out of focus to begin with. But as my non-flash sensor was trying to compete with the flashes, it was creating this band of light on my images. I noticed a number of these, later on.

I can’t say I knew this was happening in real time as I was shooting, not chimping. But my stomach was doing flips later when I saw this on the back of my camera. I was pretty worried I didn’t get anything good because of this.

And when you’re in this type of situation, where the subjects are moving and adjusting, and you’re trying to keep up, you have to shoot a lot of frames. Not quite spray-and-pray…but in that neighborhood. Luckily, that strategy paid off.

This photo of  Bruce and his wife Patti, just after entering, got a lot of play on social media.

A fun one of the director, Gurinder. 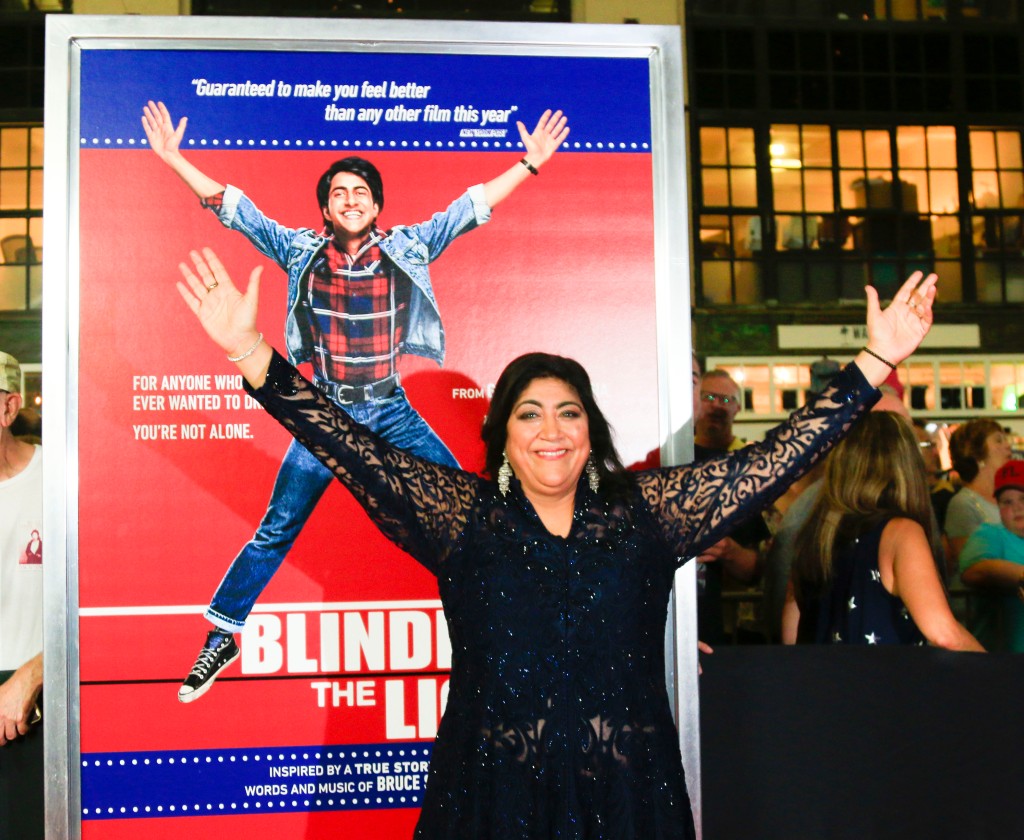 The movie started at 7 p.m. and most of the photographers cleared out after the red carpet part. Our passes didn’t include a ticket to movie and it was packed. So I just killed time while the movie went on. At one point, I was going to walk down the boardwalk to the Asbury Park Yacht Club to see my friends, The Vansaders, play. But it was raining and getting close to 9 pm. I wanted to be in position in case anything developed once the film let out.

The area from the Paramount Theater across the concourse into the Convention Hall stage area was sectioned off. Even though I had good position there, I was didn’t any good shots as the folks (Bruce, the actors, etc) walked from the theater to the hall.

Once everyone went into the VIP after party – which I again had no access to – that was about it for the night. The concourse pretty much cleared out but security was still tight.

But I knew Chris, the editor at Backstreets, really wanted shots from inside the VIP party. I even texted him at one point and said “I don’t think I’m going to be able to get it.” I could sense his disappointment. And I could hear the Jukes playing. So I hung around trying to figure out how to somehow get it.

And then…my patience was rewarded. I saw Gurinder’s husband, Paul Mayeda Berges come out of the party with their two young kids, presumably to take them to the hotel.

I went over to Paul, said hello and introduced myself as shoot for Backstreets. I asked if I could grab a photo with the signage in the background. And he said sure.

As I thanked him, he said “Are you going back in?”

I told him I didn’t have a pass to get in. He looked at me, and motioned for me to come with him. He walked me over to the security guards and asked them to let me in.

They said no, I needed a pass.

He asked again – he’s the director’s husband and a screenwriter on the film!

They said no, I needed a VIP pass.

He fished around his pockets, came out with a crumpled envelope which had a pass in it.

“Can he use this?” Paul asked security.

Paul patted me on the shoulder, winked and said go have a good time.

And five minutes later, for the second time in five weeks, I was shooting Bruce Springsteen on stage with the Asbury Jukes. 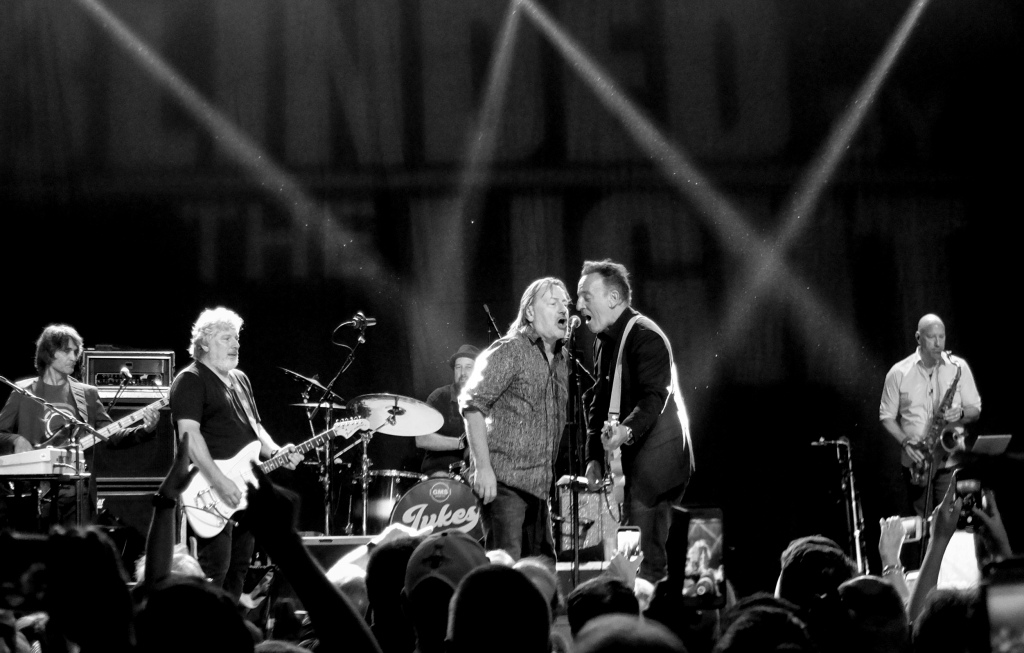 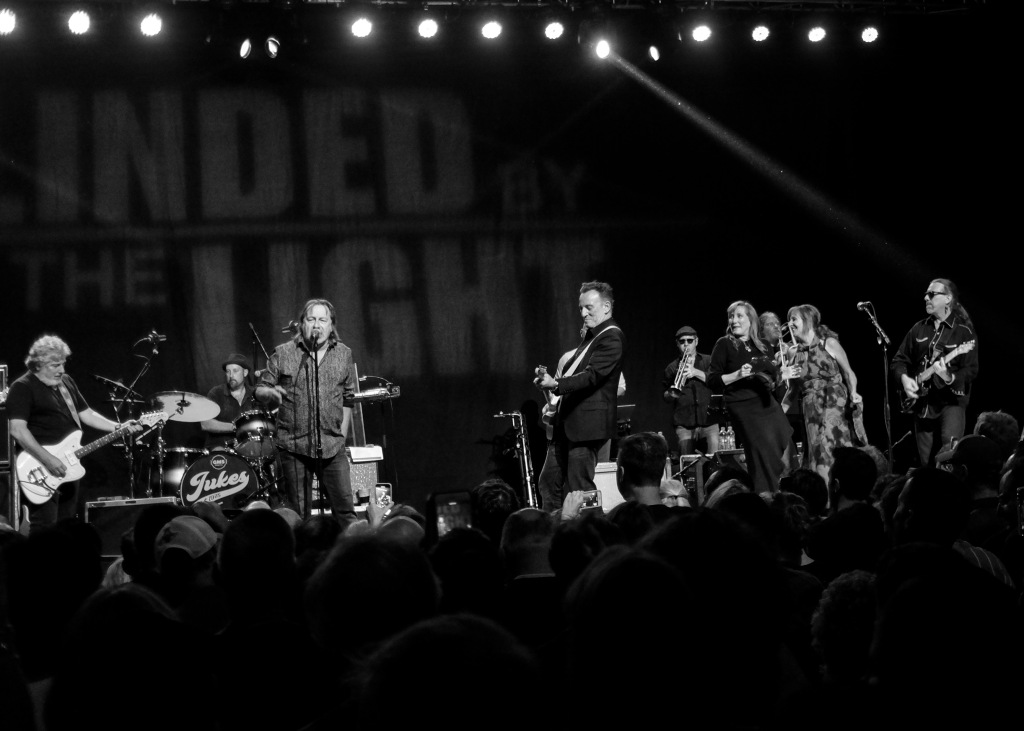 I wasn’t super close and all my shots were basically with my Fuji at arms-length over my head. But I do like what I was able to get.

So, yes, all in all, it was not only an incredible night to be in Asbury Park, but I came away with a number of learnings should I find myself in that type of situation again.

But first and foremost I again learned that patience is an active ingredient in photography!

You have to practice it – and good things can happen!

2 thoughts on “Event: On The Red Carpet in Asbury Park”