A Final Plunge To Start The Year

Back in 2008, I was just getting started in my photography journey.

And I decided I wanted to photograph a Polar Bear Plunge. Figured there would be interesting people to photograph and hey, maybe they’d let me shoot it.

So I scoured the internet to find one to to shoot. And I found it down in Asbury Park.

Fast-forward to January 1, 2020, and I was back in AP shooting the Sons of Ireland Polar Bear Plunge, standing in the surf, for the 12th time. 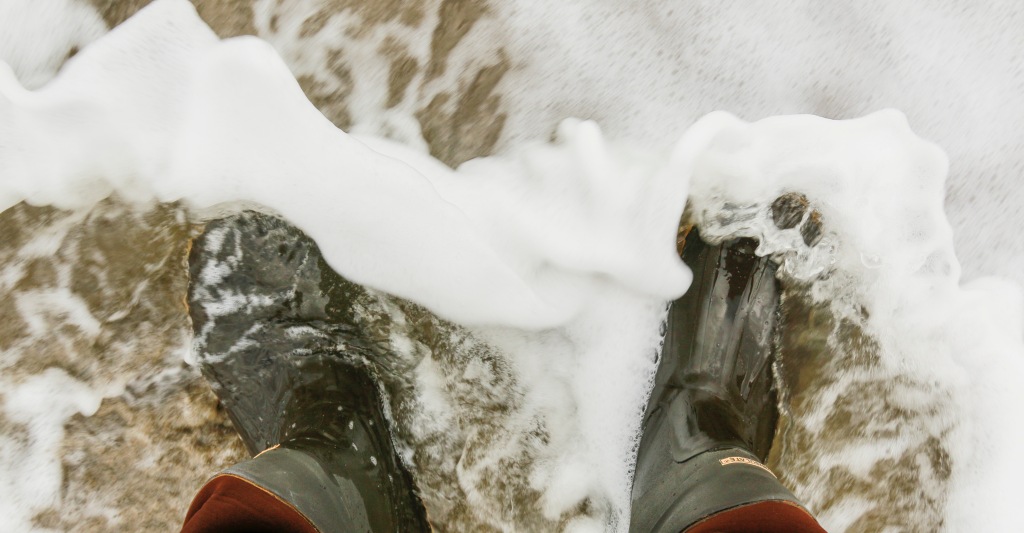 And for the 12th time, the plunge did not disappoint.

I haven’t heard the final number of people going in, but overall, the Sons of Ireland (the the 19th Polar Bear Plunge they’ve done) raised more than $75,000 for two local charities, Mary’s Place By The Sea and You Can Not Be Replaced. Gotts, a DJ from WRAT radio, leads the plunge.

75 Grand. That’s a big number for these charities. And such a great amount to be raised by the people that get up out of bed on New Year’s Day to jump in the chilly ocean.

Water temp was about 43. Air temp was about 39 – breezy and chilly. Waves weren’t too bad, though the tide was in so there was less beach to run down. That may be a good thing – that sand can be pretty cold if you’re standing on it in bare feet.

My gear was basic: Canon 70D with my 24-105 lens and a rain cover on it to keep it mostly dry. Me, I was in insulated, chest-high waders with a 3/4 length North Face jacket on. This has been my go-to kit for the past several years and it works on on all levels. There was the usual mix of apprehensive first timers, experienced salty veterans, and just the crazies (but in a good, fun way crazies).

The are led out of Convention Hall by a band of bagpipers. Then, once the National Anthem was done…the crush started. 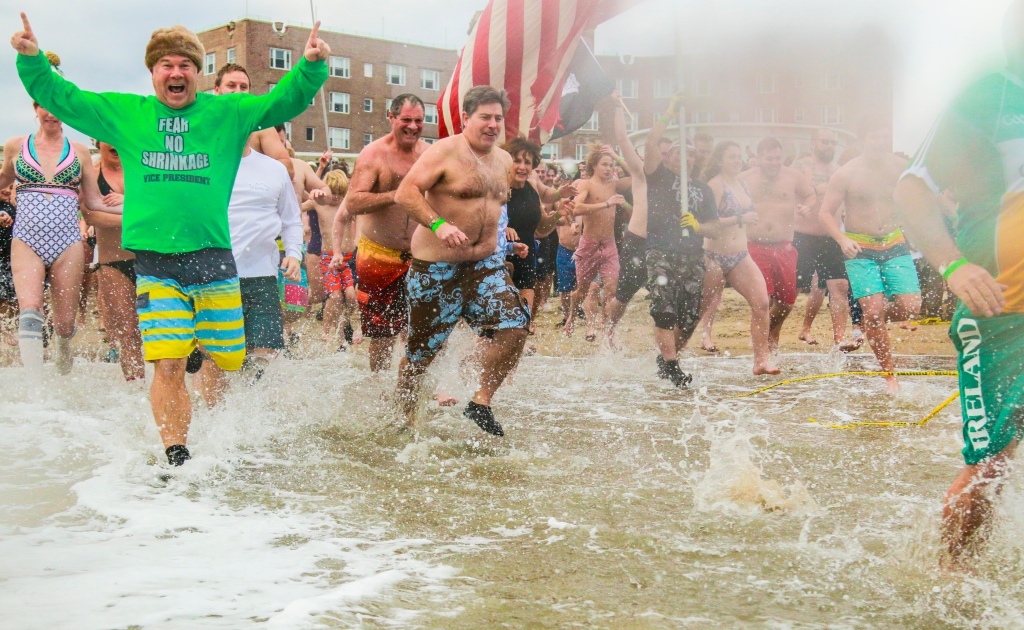 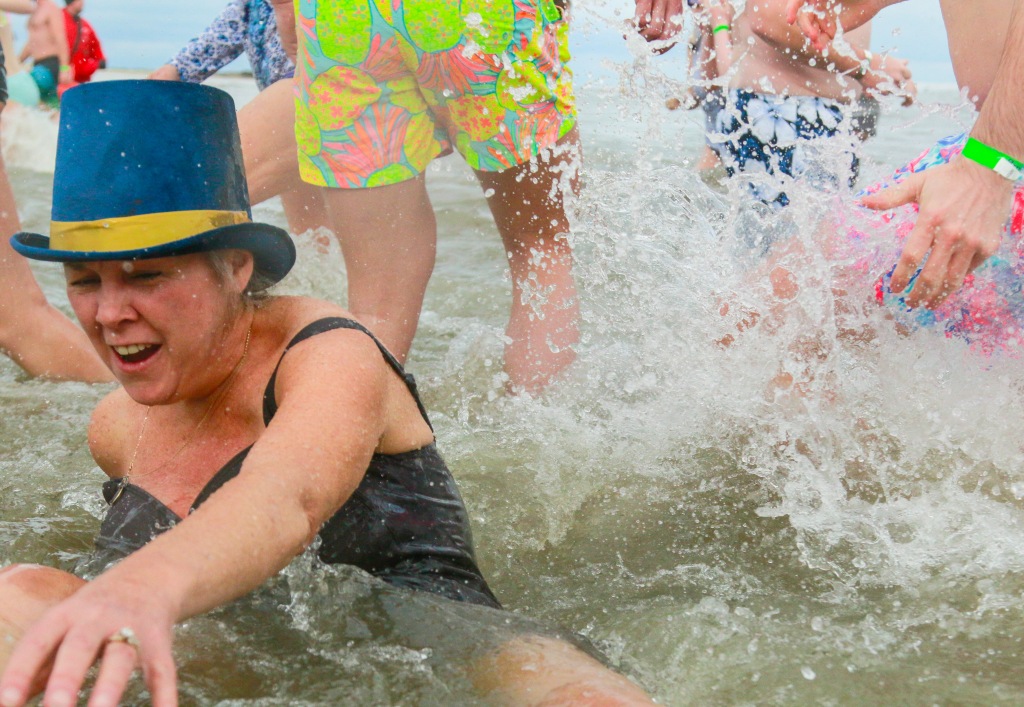 After the initial rush in which I’m a) trying to get some cool *splash* shots while b)trying to keep the Canon as dry as possible, things slow down and I can pick and choose who to shoot.

While still trying to not get taken off my feet by a wave. 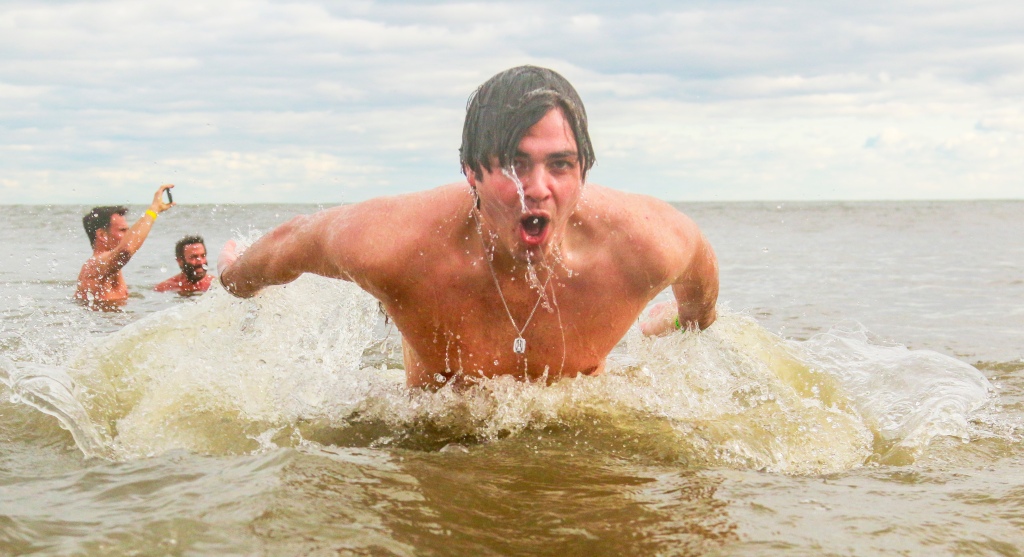 This one was a bit bittersweet for me:  Because it was  probably my last one.

My kids are getting older, they want to do stuff on New Year’s Day or go away someplace on New Year’s Even. I’ve been tied to this event these past few years. So, when the SOI reached out to me in December, I gladly accepted, but told them this would be my swan song.

I’m sure I’ll miss it next year. The people involved treat me like a long-lost brother every year, and it’s always fun to see some of the same plungers year after year.

But, it’s time for me to move on. I stayed intact another year, my camera stayed (relatively) dry.

Time to go out on a high note. And a dry one.

If you want to see my progression shooting these events, click here to see past posts.