Project: Checking In With Jeff Kazee Way back when the winter winds were still blowing, I got voicemail message.

“Mark. Jeff Kazee. Hey, give me a call, I want to discuss a project with you.”

Now, I wouldn’t say Jeff and I go “way back” but we have a few years of history under our belt.

Jeff has been the long-time bandleader for Southside Johnny and the Asbury Jukes. An Ohio native, he’s now lives in Queens, New York, but spends a lot of time in New Jersey playing gigs all over the place.

I first “met” Jeff in 2017, when I shot the Asbury Park Music & Film Festival when he and the piano he was playing got in the way, initially, of me shooting Bruce Springsteen, Little Steven and Southside Johnny – the Holy Trinity of Asbury Park’s Rock ‘N Roll scene. But a little shifting over and it was all good.

It was the following year that we really met, though. Jeff has a lot of side projects that keep his creative fire stoked. One of them is called the Early Elton Trio. He had posted about a gig in AP on Twitter, and I responded my saying “I’d love to shoot that.” A couple of DM’s later, a phone call to chat…and I was in to shoot that gig, all access. Since then we’ve kept in touch. Often lobbing tweets over the course of Twitter about our favorite basketball and baseball teams, or music, or travel (he hooked me up with a great music club to hit when I was in Dallas one time) or whatever, he’s also gotten me “on the list” for a number of Asbury Jukes shows, including a unique pandemic-era one in a parking lot.

Jeff is a musician’s musician and creative as hell. So, I couldn’t wait to discuss this new project with him.

So, we hopped on a call and started to discuss what he wanted. What I love about Jeff is that he’s so collaborative. He told me what he was looking for, what he was thinking, I came back with some of my thoughts, and we we settled on what the shoot day would be.

The background: All through the really dark days of the pandemic, Jeff would do Facebook live performances from his place in Queens. He called it his “Living Room Lounge.” He’d sit at his piano, play songs, banter, his wonderful wife Constance, and/or his daughters would dance. It was a fun way to pass an hour when we were all stuck at home.

So, the name of his new album is Thanks For Checking In. This is a riff on a) him being a working musician for so long, and checking into many, many hotels and motels. But it also took it’s root in what he did all through the pandemic. People would “check in” with him on this FB Live events. He and his music helped so many.

But back to the beginning. As previewed by the shot above, Jeff wanted to start out in a New Jersey diner, then head to a shore-town motel for the main shoot. The diner we settled one…one of my favorites: The Roadside Diner in Wall, New Jersey, which I knew well. Been there many times. In fact, when I was shoot the Sons of Ireland Polar Bear Plunge every New Year’s Day, I’d start the day with a big breakfast there. Even did a portrait of the owner once.

So that’s where we started. 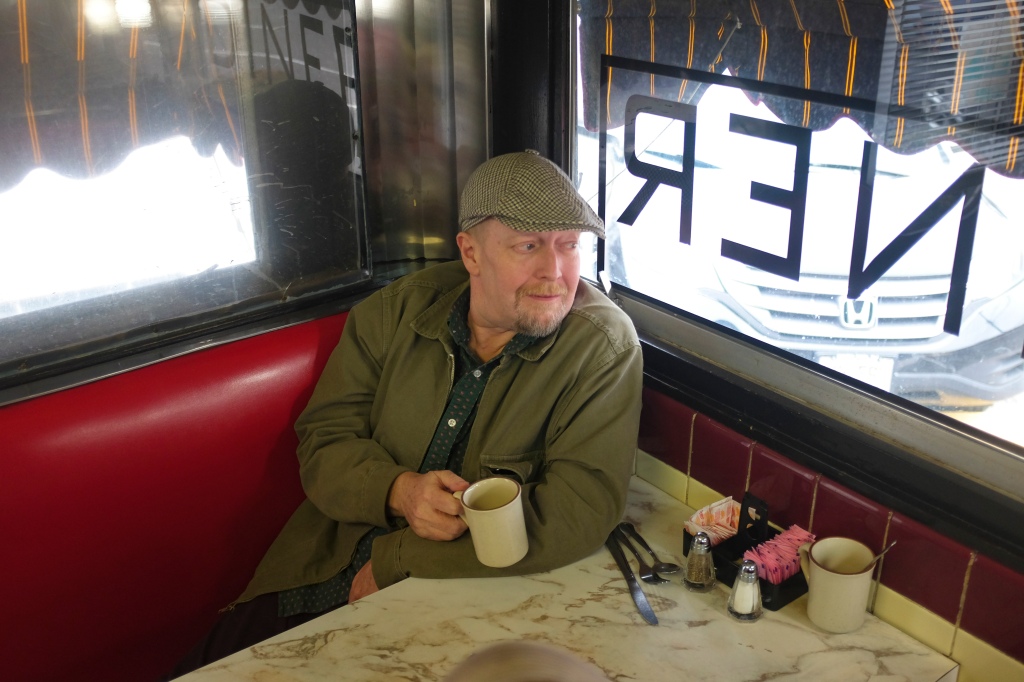 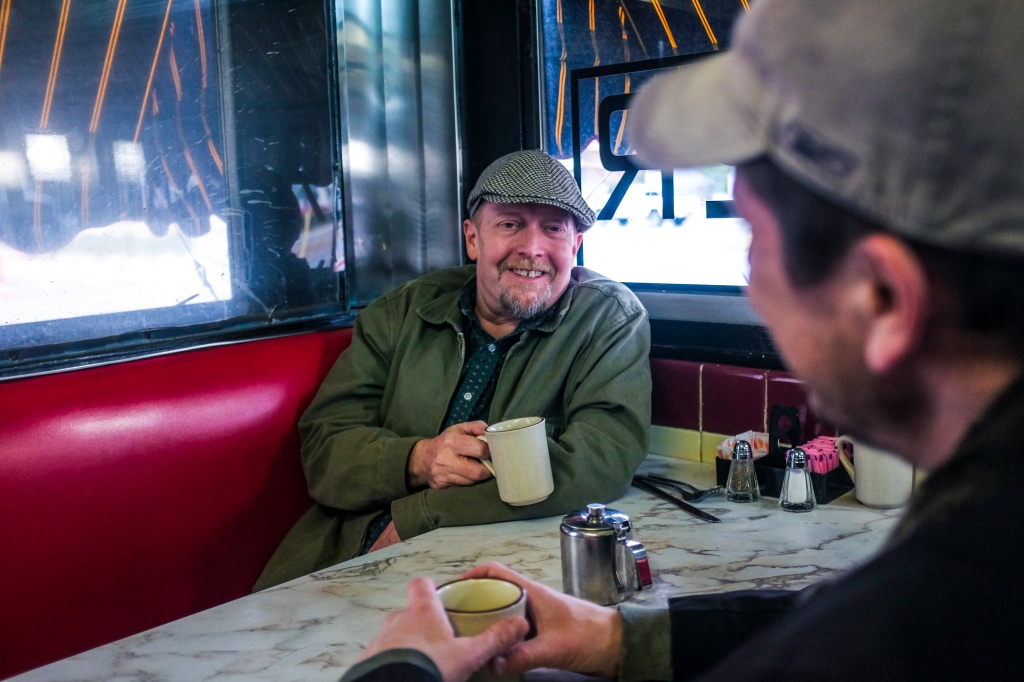 In the frame here is our mutual friend, Sammy. 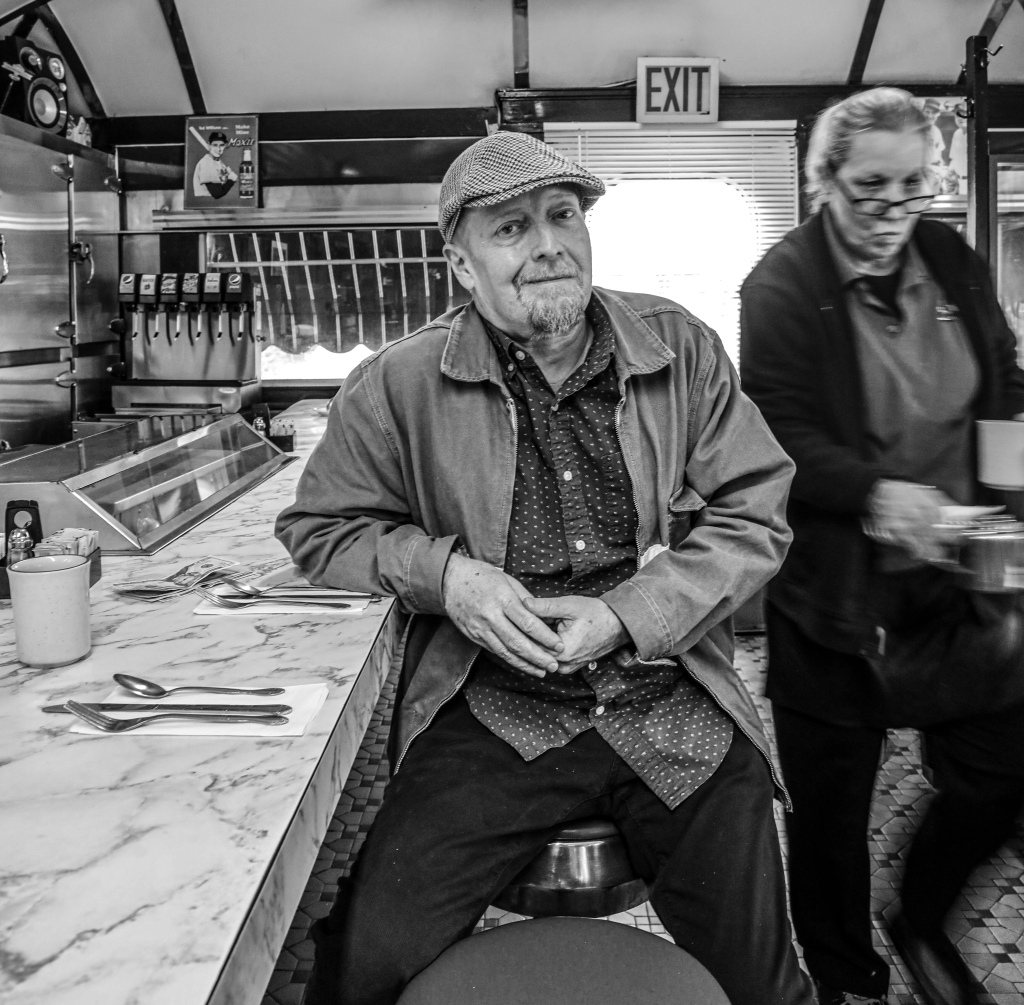 My favorite shot from the “diner sequence”. I like having the waitress movement here. Unplanned. She was just working her shift.

Now…Jeff’s has been around the block…and the world…a few times, and has sat in with many, many bands. But, surprisingly, I was able to key him into a bit of NJ musical history.

Jeff: Wait, what? I’ve golfed with Tico (Torres, the Bon Jovi drummer) many times when I’ve been on tour with them. I never knew this! 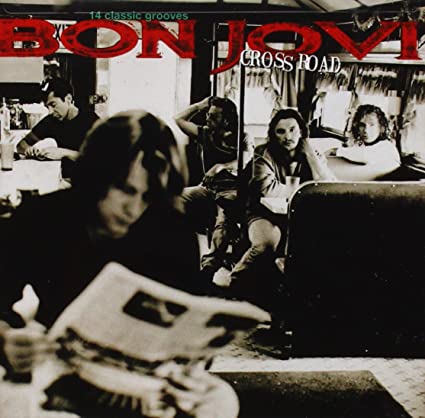 That’s Tico Torres against the window the back, in the booth where we were siting. Ok, so, we worked the diner scene for a while. Wasn’t sure if anything would be used, but I wanted Jeff to have some stuff for social media and marketing from this perspective. He’s on the road a lot – he’s comfortable in diners, part of who he is as a musician.

Now, going in, I knew I wasn’t shooting for the album cover. Jeff had long-time friend Bob Delevante, a STELLAR artist and designer do the the cover artwork. I’ve never met Bob in person, but we’ve connected on social media, but he seems like a great guy, a super creative person, and I’d love to hang with him one day. He’s also a fantastic musician that plays with Garry Tallent. 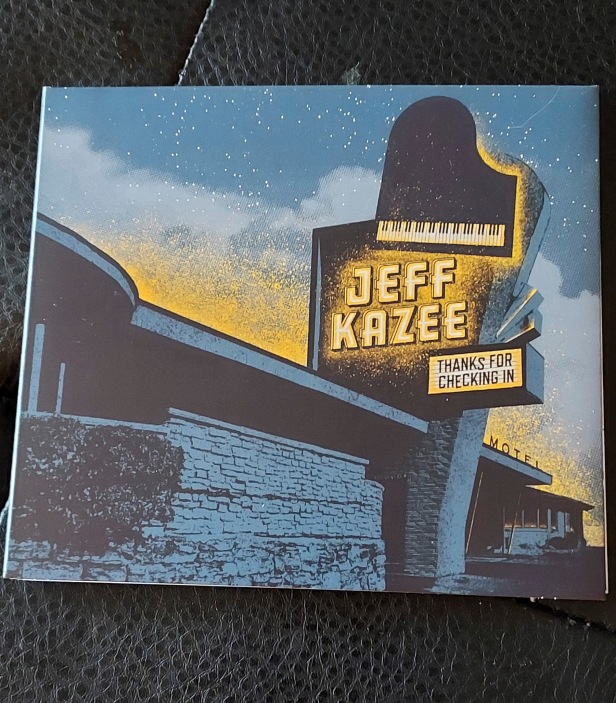 So, Jeff’s cover was done, but he needed other photos for interior, his website, socials, etc. And for that we needed a main scene: A beach town motel.

At first, I didn’t think much of this, just Ok, cool, yeah!…then, as we pulled into said beach town – in this case, Point Pleasant – I realized….Wait, it’s off season. What motel will be open now??

Anyway, we found a motel we could work out of for an hour or so – the Atlantic Motel on Broadway in Point Pleasant. Like I said earlier, this was a little trickier than you’d think. It was February in Point Pleasant – not a lot of the motels were open since it was out of season. We had to drive around a little to find one. And then, when we did, Jeff pitched the concept to the manager. Thankfully, the manager was open to it and the Atlantic was perfect!

As soon as we got in, we set about setting the scene and worked on a few different concepts, mostly centered around the desk in the room. Jeff said when he’s on the road, he’s often writing songs. And that’s where he does it. 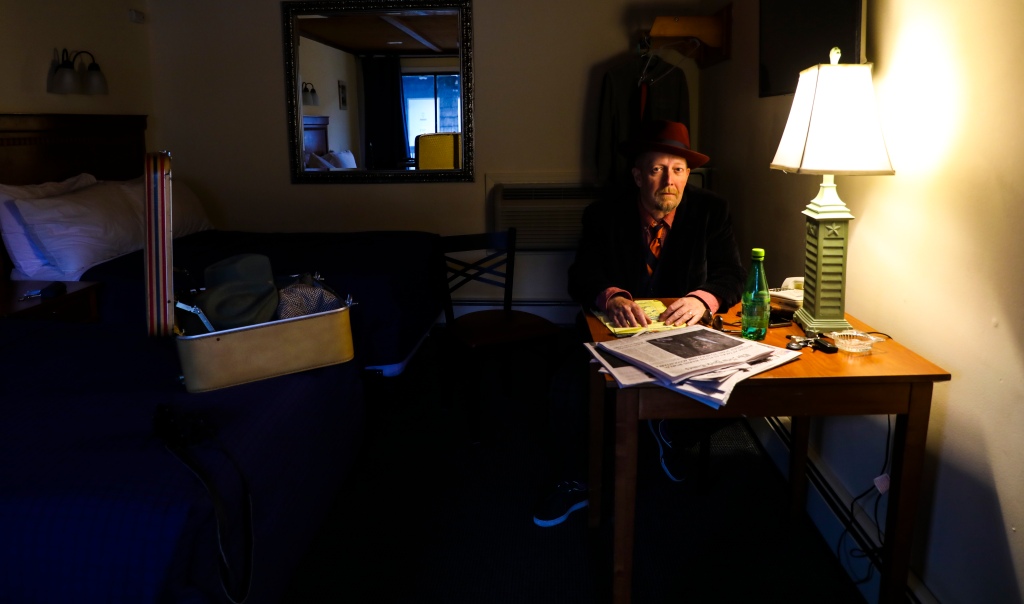 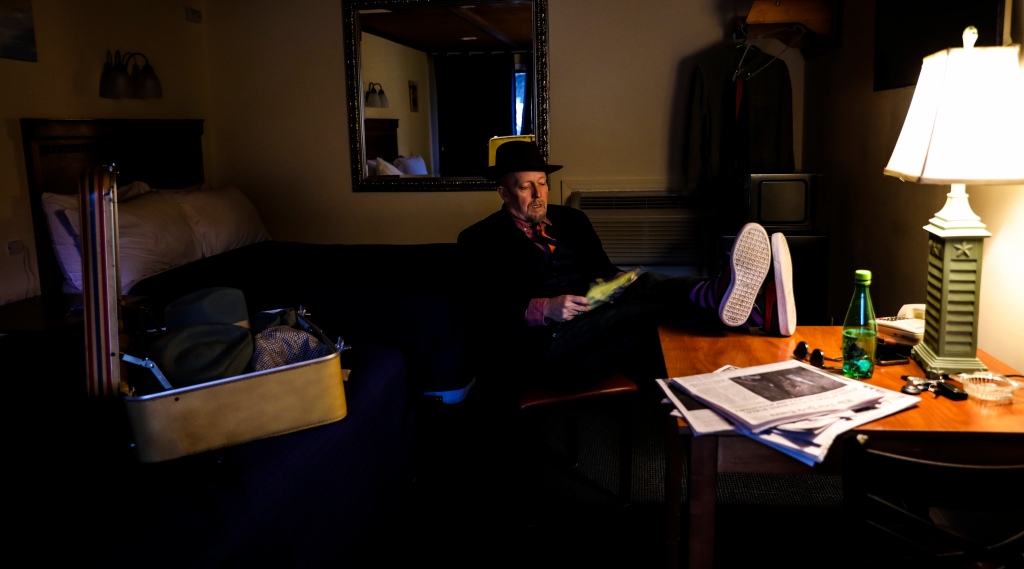 A typical scene from Jeff’s life. On the road. In a motel. Reading the NY Times, writing songs. 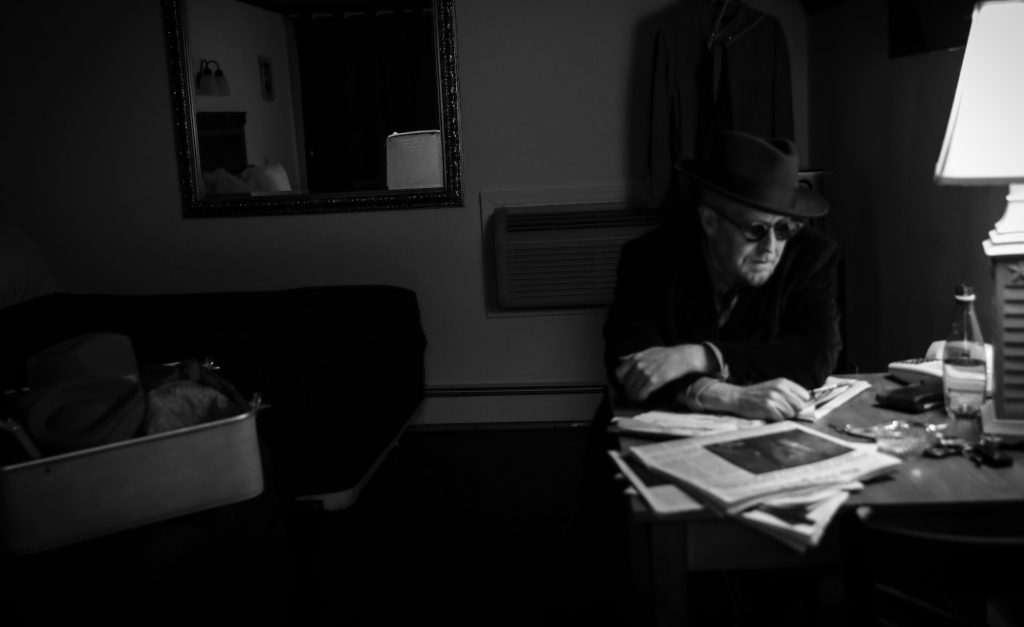 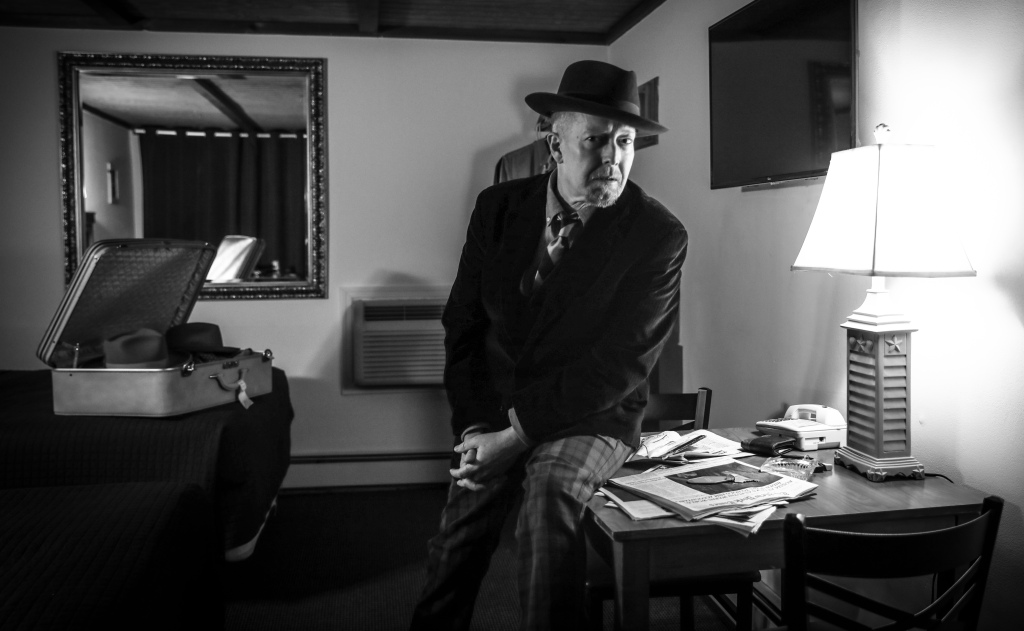 Scroll down for a funny story about that suitcase 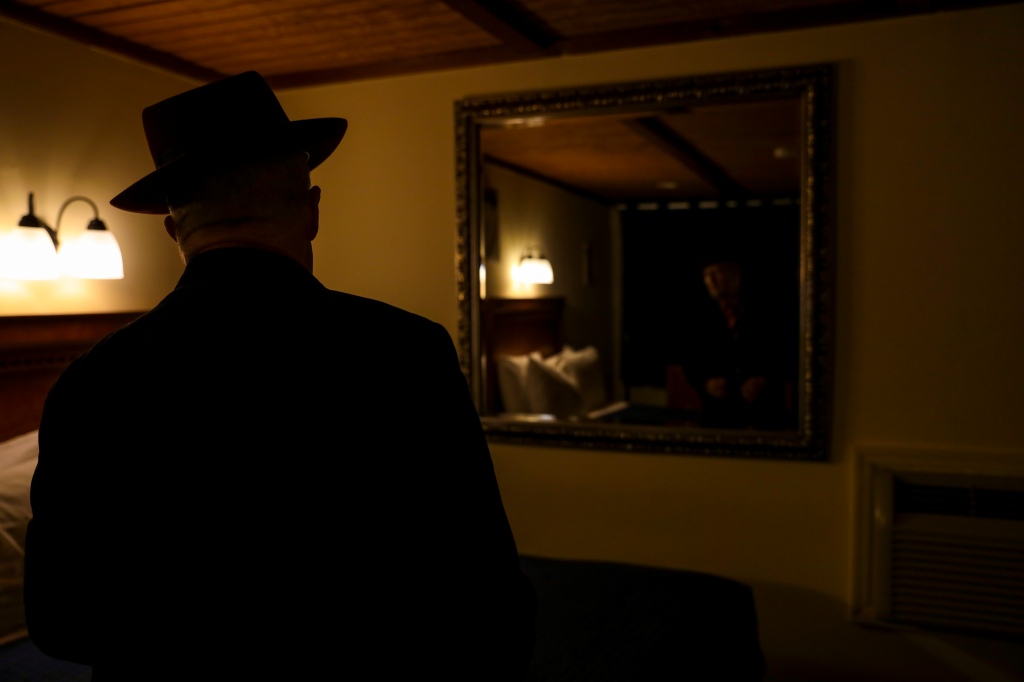 And then….after shooting inside for a couple of hours, before it got to dark, Jeff and I wanted to do a doorway shot. You know, like he just checked in. I love the neon reflection in the window. And Jeff in the doorway. 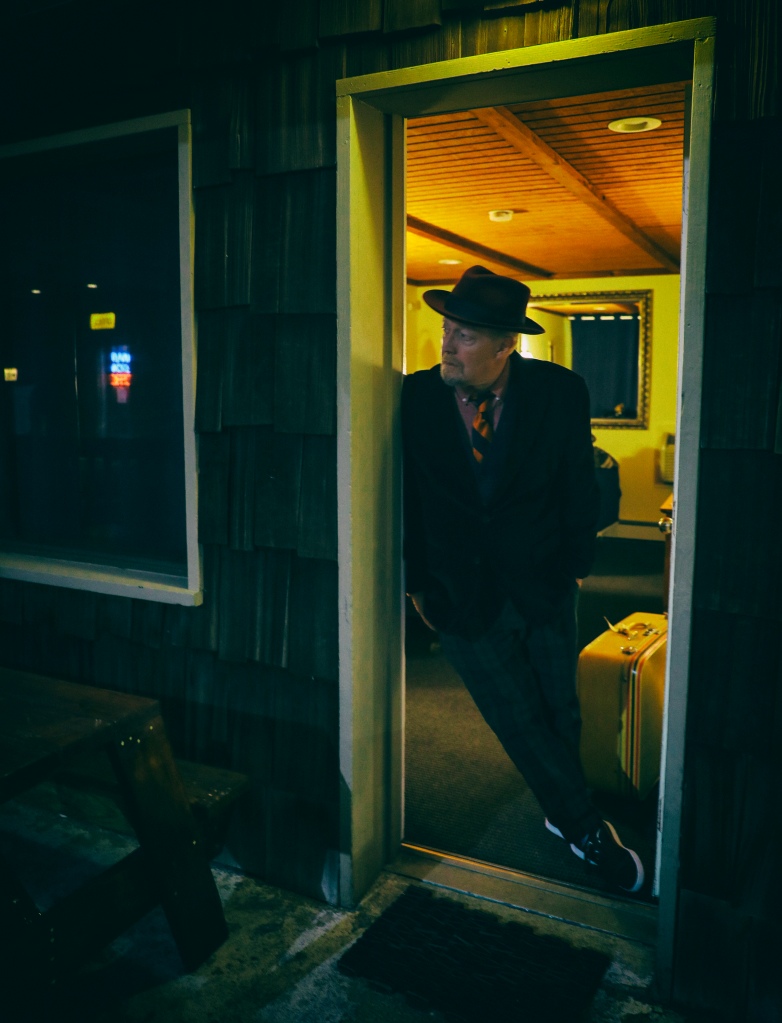 And boom! That’s the one that got printed. 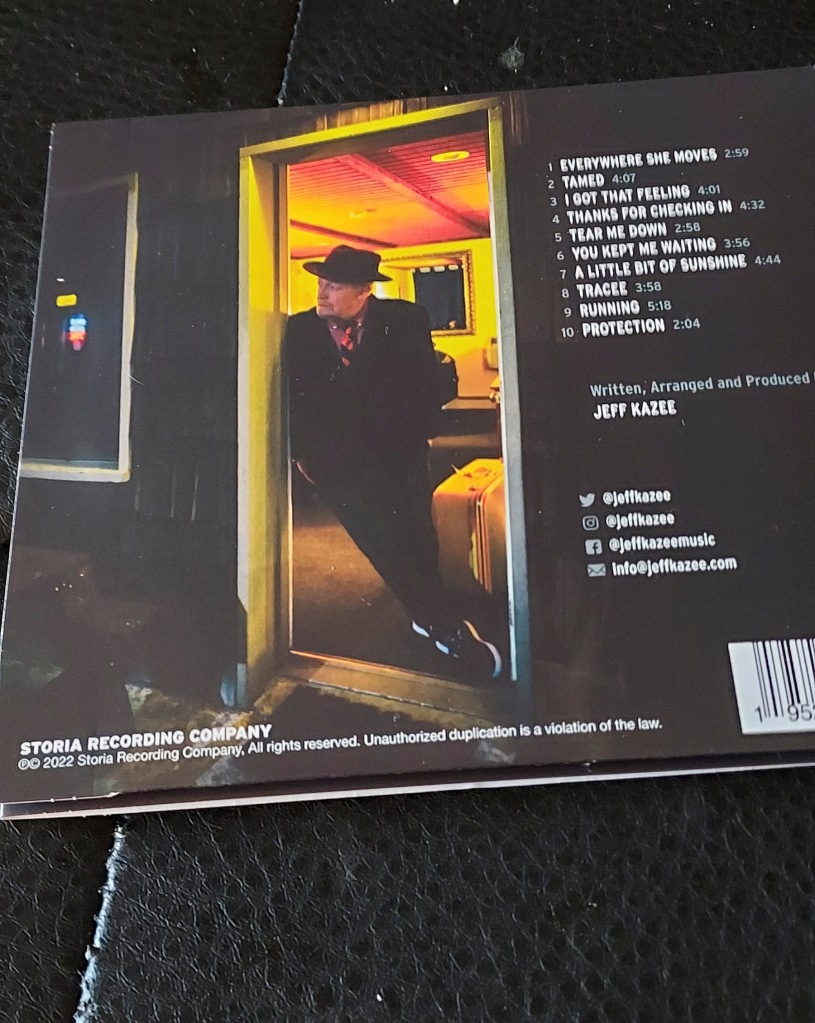 I hadn’t looked at these images  for awhile, and went through them again putting this post together. I’m really happy and proud of what was produced. Thrilled I could execute on Jeff’s ideas and concepts and give him some material he could use. Check out this clip:

Summer is starting here in New Jersey. Memorial Day Weekend is our unofficial start. Music is always a big part of summer for me. And Jeff’s album will be in heavy rotation.

If you love great music – I mean music, not just a mash of sounds – pick this album up by Jeff. Buy it here and stream it on all major platforms.

Afterword: Oh, ok…so, in this shoot I used my Canon 5DMark4 and had wanted to set up Neewer Vision 4 monolight. However, when we got there, I realized the bulb in the Neewer was broken and I couldn’t use it. I had to use the light the room gave me, but I think it worked out OK. That little desk lamp was perfect. I also ordered a new bulb immediately when I got home and now always keeps a spare in my bag.

When Jeff and I were discussing the “look” of the photos, he said he wanted a yellowish-green effect. I achieved this by using an Nik Analog filter and tweaking it. It really gave us the look the wanted.

And the suitcase? One time, a few years ago, when I was dropping stuff off at recycling, I saw someone had left this suitcase. I loved it. In fact, it still had a Newark Airport tag on it from the ’70s, which I loved. I use it now to hold my lighting gear, but thought it may come in handy for this shoot, so I brought it along. Jeff loved it. As you can see in the pics, we made good use of it. And it even made it onto the CD! Thrilled to see my rescue got put to good use!

2 thoughts on “Project: Checking In With Jeff Kazee”