So, The Big Game is coming up on Sunday. There’s a few questions that will be asked between now and then:

Q1) Who do you think will win?

Q2) You going to watch the commercials?

Q3) What are you making?

Now, for me , being a Philadelphia Eagles fan my whole life, the answer to the first one is pretty easy.

The answer to the second question is pretty simple, too:

A2) I don’t care. What’s the big deal? They are all on YouTube now anyway.

See, a long, long time ago, in the BC Era – Before Children – I had a tradition. Every Sunday when the Eagles would play, I went all out with the food I cooked up for the game, even if it was just me and my brother-in-law watching. More specifically, I liked to tailor my game-day meals to whomever the Eagles were playing that day.

So, if the Eagles were playing Miami, Cuban Sandwiches were on the menu. If they were playing the New Orleans Saints, gumbo. Or the Minnesota Vikings…well, that was challenging because Minny doesn’t have a particular food it’s known for. Think I did a braised rabbit stew, something a Viking might make.

And, since they played the New York Giants at least twice a season – I had plenty of opportunity to craft New York-related entrees: 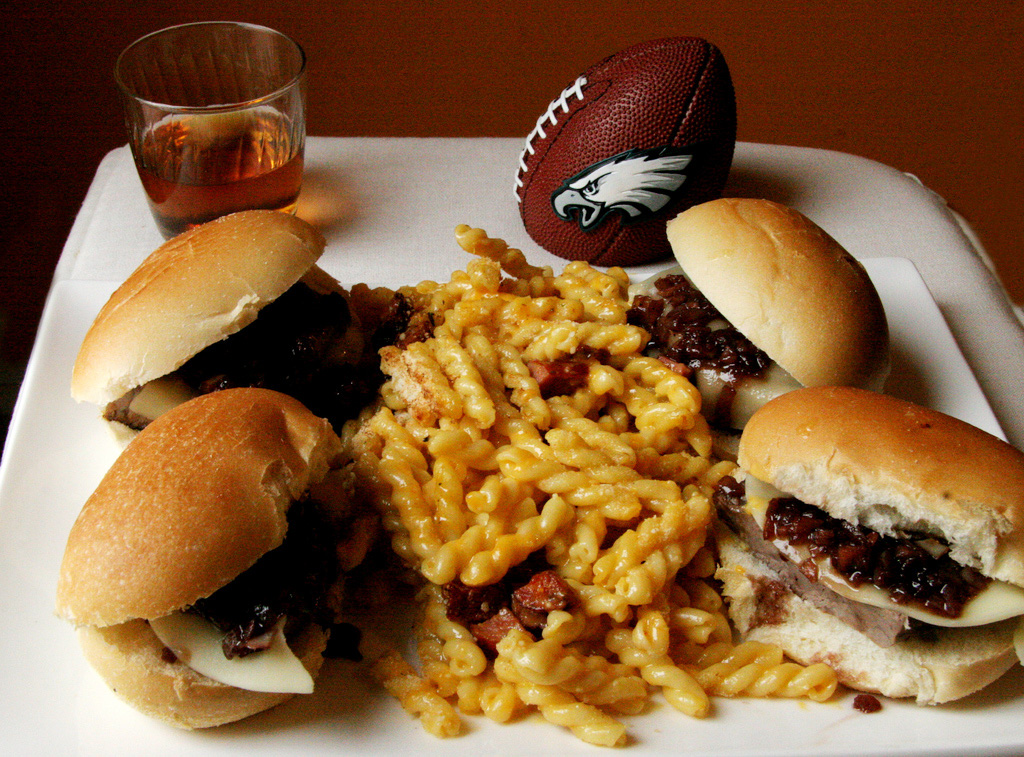 Like my New York Strip Slider Sandwiches, topped with Provolone cheese and diced onion, garlic, shallot, salt, pepper, sauteed in some port wine. On the side, homemade mac ‘n cheese made with Gemini pasta, New York cheddar and diced chorizo to give it a nice smokey flavor.

Or, my take on Ben Benson’s Steak A La Stone. Steak on onions, peppers and pimentos. (this one tasted better than it looked)

Or, a bit more NY-deli classic, the pastrami on rye. This one tasted as great as it looks.

And, for the big game, well, you have to go big. Appetizer: Go with some Creole shrimp (jumbo shrimp sauteed in Creole seasoning, red pepper and garlic, spritzed with some lemon juice).

For the main course, an Italian hamburger (ground Angus beef along with some Italian sausage grilled,) then nestled between two pieces of grilled Italian bread, dressed with lettuce, tomato, cheddar cheese and provolone cheese. On the side, some crispy red potatoes mixed with cilantro aioli.

And you can never ever ever go wrong, no matter who is playing, with the dish that leads this piece: A classic Philly cheese steak, onion rings and a Philadelphia Brew Company ale.

That may be just the ticket!